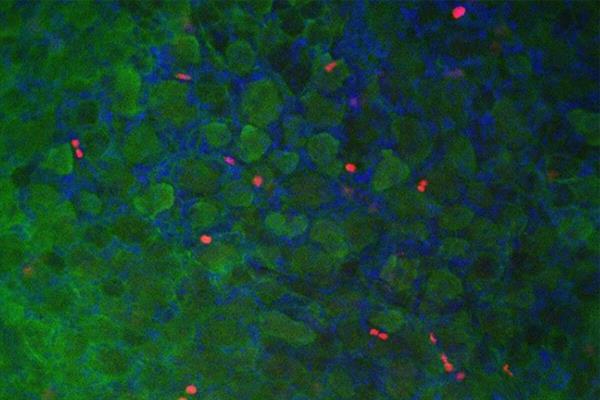 The team at the Brain Tumour Research Centre of Excellence at the University of Plymouth has taken an exciting step forward in its work on neurofibromatosis type II (NF2).

A paper from Professor David Parkinson and his team, published in the journal Brain, is progress in the development of a non-surgical treatment for NF2 patients who have developed schwannoma tumours, also known as acoustic neuroma.

Schwannomas are the most common nerve sheath tumour; they originate from specialised cells which surround nerve fibres. Schwannomas can occur sporadically in people, but may also arise due to a genetic condition known as neurofibromatosis type II (NF2). For both sporadic schwannomas and those associated with NF2, tumours develop along the nerves responsible for hearing and balance, leading to hearing loss, tinnitus, and balance problems. These are known as vestibular schwannomas, and for NF2 patients are usually present on both sides of the head. NF2 patients may also develop additional tumours on the nerves that serve the arms and legs, as well as meningiomas and ependymomas.

There are no approved chemotherapies for these tumours and the surgical removal of the tumours carries a high risk of damage to surrounding nervous tissue. New treatments for schwannoma and other NF2-related tumours such as meningioma are urgently required.

NF2 is caused by a faulty copy of a gene also called NF2. When working properly, the NF2 gene produces a protective protein called Merlin that participates in cell signalling that prevents tumours from forming. The faulty gene in NF2 patients results in their cells following a pro-tumour signalling route instead, leading to tumour formation.

This research paper investigated the effect of blocking one of the final stages of this pro-tumour signalling pathway. They demonstrated that two drugs, VT1 and VT2, successfully blocked this final stage and showed that in doing so, not only did schwannomas stop growing, but they also shrank in size.

They concluded that the successful response to the drugs in their pre-clinical investigations provides a strong endorsement for early-phase clinical trials of both VT1 and VT2, potentially providing patients with schwannomas a successful alternative treatment to surgery and radiotherapy to manage their condition.

The team in Plymouth are now moving on to see if these new compounds are also effective in the treatment of meningioma, the most common tumour type found within the skull.

Prof Parkinson said: “For patients with NF2, who often have both meningioma and schwannoma tumours in their nervous system, the prospect of a single drug that could treat both tumour types is clearly an exciting prospect.”

The research has been partly funded by the Children’s Tumor Foundation. Grant Identifier: 704602.