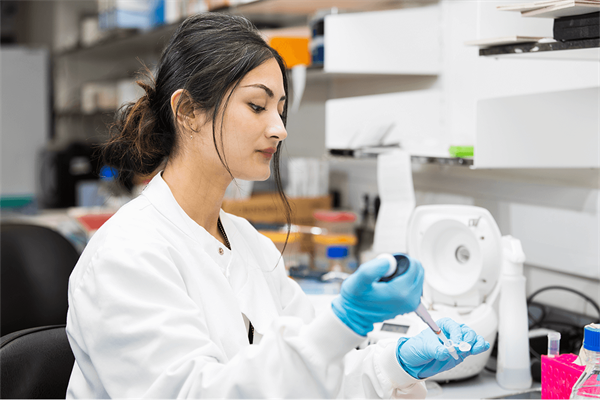 New insights on a genetic mutation that contributes to different types of gliomas could improve the delivery of more precise, targeted treatments in the future, which we know are needed to improve outcomes for high-grade glioma and low-grade glioma.

Gliomas range from low-grade (slow-growing) astrocytomas to high-grade (faster-growing) glioblastomas, the latter associated with a much worse prognosis. Given the different forms of glioma that exist, and the poor survival from the higher-grade forms, more effective therapies that target these different forms are required urgently.

Professor Kurian explains further that “The goal of such targeted therapies is to home in on specific defects in cancer cells that arise in genes whose DNA has been damaged or mutated. One such gene, found in mutated forms in many different types of tumours, is called BRAF. It produces a protein that plays an important role in controlling the growth of normal cells. However mutated forms of it have been found in glioma, as well as in melanoma, thyroid cancer, serous ovarian cancer, colorectal cancer and non-small cell lung carcinoma.”

Many different forms of mutated BRAF exist. In this report, recently published in the journal Neuro-oncology, the authors, led by Professor Kurian, conducted a detailed review of existing evidence about one particular form of BRAF - called BRAFV600. Using information from 182 research publications, which included data derived from 13,682 patients, their analysis revealed that BRAFV600 occurs most frequently in epithelioid glioblastoma, pleomorphic xanthoastrocytoma, anaplastic pleomorphic xanthoastrocytoma, ganglioglioma and anaplastic ganglioglioma, which tend to occur in children and young adults.

The authors recommend testing for this mutant form of BRAF across these five types of glioma.

The team also reviewed results from 92 clinical studies that had used BRAF inhibitors in patients with BRAFV600 mutant glioma. Overall, the results suggest that drugs that target BRAFV600 in glioma are promising. However new adjuvant randomised trials of BRAF inhibitors combined with another drug called a MEK inhibitor are needed, particularly in the five types of adult and paediatric low-grade and high-grade gliomas identified.

In a different but complementary study, the activity and safety of dabrafenib plus trametinib were evaluated in adult patients with recurrent or progressive BRAFV600E mutation-positive high-grade glioma and low-grade glioma in the Rare Oncology Agnostic Research (ROAR) trial. The findings were that dabrafenib plus trametinib showed clinically meaningful activity in patients with BRAFV600E mutation-positive recurrent or refractory high-grade glioma and low-grade glioma, with a safety profile consistent with that in other indications. The results have been published in the Lancet Oncology, in which the authors conclude that BRAFV600E testing could potentially be adopted in clinical practice for patients with glioma.

As Professor Kurian concludes “This prospective activity and safety trial has delivered positive results and our work helps to identify patients, mainly younger, patients for whom these therapeutics could work. The next steps include larger trials and NICE approval then we would be on the pathway to improving outcomes for patients with this mutation.”

Dr Williams' team, with support from the Brain Tumour Research Centre at Imperial College London, have produced a fascinating new paper describing the use of AI to measure muscle in GBM patients to help predict survival. Sarcopenia - loss of muscle mass - has long been known to be linked with poorer outcomes in cancer patients, as well as lower survival in GBM patients. Most of this work has been done based on imaging of the body, but patients with GBM tend to have MRI scans of the head, rather than of the body. In this work, researchers wanted to see if an automated approach could quickly and accurately measure the area of muscle around the head in brain tumour patients and whether this predicts disease progression or survival.

The team chose one particular muscle (Temporalis) as there was previous evidence that it could be used as a proxy of skeletal muscle mass and was linked with survival and wanted to see if it would be possible to automatically assess the muscle from brain scans. They validated their initial work using additional external datasets and further added to the evidence that temporalis muscle is predictive of survival in brain tumour patients.

The main advantage of this approach is that is uses the MRI scans that patients have routinely, and takes less than 2 seconds to assess muscle mass for each scan. The hope is that this approach could aid in improving prognostic methods, patient stratification and optimization of individual treatments.

Dr Williams told us “There is a correlation between muscle mass and survival, and our aim is to be able to use this in routine practice for better decision-making"

The full paper can be accessed in the British Journal of Cancer.

A phase II trial of cannabis-based drug Sativex in treating glioblastoma known as ARISTOCRAT will open in March 2022 at 15 NHS hospitals. Sativex (an oral spray containing cannabinoids THC and CBD) — which is already used in treating multiple sclerosis — was initially found to be tolerable in combination with chemotherapy offering the potential to extend survival in a phase I trial in 27 patients earlier this year. This phase II trial, funded by The Brain Tumour Charity and led by University of Leeds researchers, will now assess whether adding Sativex to chemotherapy could extend life for those living with recurrent glioblastoma.

The study’s findings are published in  Nature Cancer.

There is plenty of notice for this proton beam therapy public lecture. High energy Proton Beam Therapy (PBT) is a type of radiotherapy that uses a beam of high energy protons to treat specific types of cancer. Following ten years of provision under the Proton Overseas Programme, which provided treatment abroad to over 1,100 patients with costs met by the NHS, PBT began in England in 2018, with the opening of the Proton Beam Therapy Centre at The Christie in Manchester. The second NHS centre will open at University College London Hospitals NHS Foundation Trust (UCLH) in late 2021.  This lecture, for the public, healthcare professionals and academics alike, brings together leading oncologists, medical physicists and therapeutic radiographers to present and discuss current and future aspects of PBT, including:

Date for this lecture is Wednesday 9 February 2022, 6.30-9pm, and the location is Logan Hall, University College London