Stress, hydrogels and join the team at QMUL 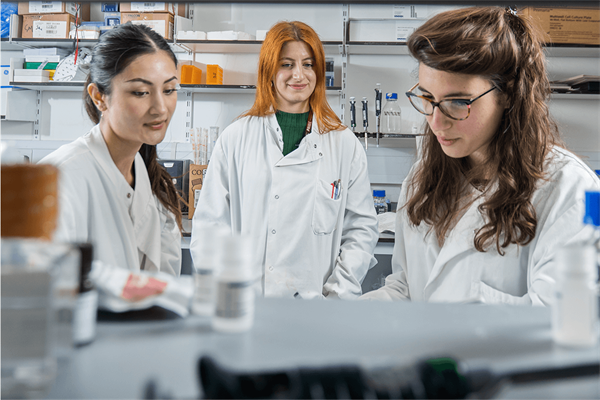 Glioblastoma treatment usually includes surgery, radiation and then chemotherapy. Unfortunately, these tumours almost inevitably adapt to evade the anti-cancer drugs that at first seemed to shrink them. New evidence shows that glioblastoma cells can change which genes they express, and when, in response to environmental stress. This stress could be being attacked with chemotherapy drugs. These are epigenetic changes because the cancer cells don’t change the genes themselves, instead, they seem to be chemically modifying their genes in response to this stress, covering them or uncovering them as necessary to survive. A new paper highlights a mechanism by which the tumour potentially adapts to our treatment methods and how, by understanding these evasion methods that the tumour utilises, we can more effectively neutralise them.

The full paper is in Nature Genetics.

The role of epigenetics is key to the research undertaken at our Queen Mary University of London research centre and there is an opportunity for a graduate with at least an upper second class honours degree, an interest in Brain Tumourigenesis and experience in Molecular Biology, Cell Biology or Computer Science to join the Brain Tumour Research Centre of Excellence led by Prof Silvia Marino at the Blizard Institute. They will then form part of the team focused on the mechanistic characterisation of tumour defining epigenetic changes in glioblastoma subgroups and will study how they can inform precision targeting of these neoplasms.

“Paediatric brain tumours are the leading cause of cancer-related death in children – we need new approaches to therapeutics” - In this blog Dr Lisa Ruff, a Postdoctoral Researcher at DKFZ German Cancer Research Centre explains “why drug delivery is so important for the treatment of central nervous system tumours – and why hydrogels could be key to a breakthrough”.

A technique has been developed that could revolutionise the treatment of brain cancers and neurodegenerative diseases by temporarily allowing drugs and other substances to cross the blood brain barrier. A trial in four women whose breast cancer had spread to the brain showed that magnetic resonance-guided focused ultrasound (MRgFUS) could safely deliver the antibody therapy Herceptin into their brain tissue, causing the tumours to shrink.

MRgFUS uses focused ultrasound (sound waves) to open the blood brain barrier in specific regions by causing microscopic bubbles of contrast agent that have been injected into the patient to oscillate. These oscillations pull apart the cells of the blood brain barrier, allowing substances that usually struggle to penetrate the brain to pass through.

Consultant neurosurgeon at our Imperial College London research centre Kevin O’Neill was asked to comment on this news by The Guardian and said “Many therapies that are coming through for brain cancer need a delivery system that not only packages and protects them but directs them to the correct area. Injecting them into the brain is one way, but this approach would be better because it is effectively non-invasive. You are kind of opening a portal in the blood brain barrier at the desired site. It’s a step forward to opening the door to other therapies.”

The research, which took place in Canada and is published in  Science Translational Medicine, showed that the drug was successfully delivered and, importantly, none of the patients experienced any serious adverse effects. Further imaging suggested their blood-brain barriers resealed after 24 hours.

There was more news from Canada this week as scientists have described four molecular sub-groups of meningioma for the first time identifying viable medical treatment options based on the biological drivers of the disease. The identification of these four distinct groups of meningioma can be used to predict how tumours will behave and when the disease may return more accurately than existing World Health Organisation (WHO) criteria. They also found that lymphoma drug vorinostat could target the most aggressive sub-group (known as MG4) and slowed tumour growth in cell-lines and in mice, with experts now calling for clinical trials to confirm whether it may represent the first-ever effective drug treatment for meningiomas.

The landmark findings were published in Nature.

In late 2021 BNOS surveyed the UK neuro-oncology community with regards the models they are currently using in their preclinical research here is an overview of the results received from 22 different groups nation-wide.

New treatment destroys head and neck cancer tumours in trial. Scientists have found the combination of nivolumab and ipilimumab medications led to a reduction in the size of tumours in terminally ill head and neck cancer patients. In some, their cancer vanished altogether, with doctors stunned to find no detectable sign of disease.   NICE conducted an appraisal of nivolumab with temozolomide and radiotherapy for newly diagnosed glioblastoma with MGMT methylation however following disappointing data from industry NICE decided to suspend this appraisal from its current work programme in February this year.

We began with an update on epigenetics and to end this week is another piece on epigenetics that, although not brain tumour centred, will be of interest to those who are curious to learn more about ‘Epigenetics, the misunderstood science that could shed new light on ageing’.