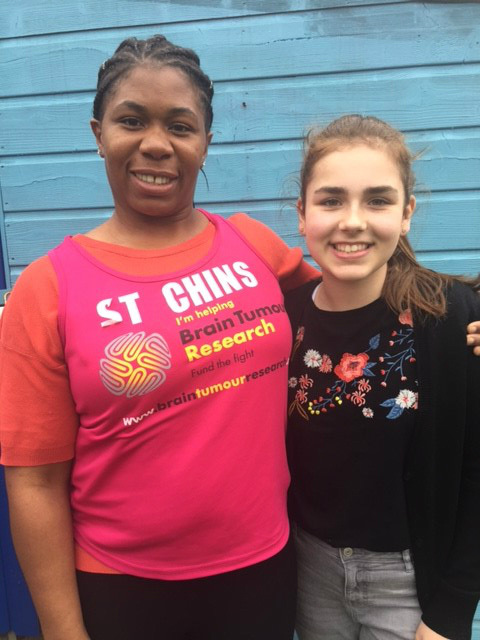 A mum of two from Rochester is taking on the London Marathon to raise awareness for Brain Tumour Research, after a friend’s daughter was eventually diagnosed with the disease following 22 doctor’s appointments.

Joining tens of thousands of runners, Esther Moore, aged 40, was inspired to take part in the world’s biggest running event after Poppy Eden, was diagnosed with a pilocytic astrocytoma at the age of 11.

Poppy, from Chatham, started suffering from sickness and headaches in 2013 however it wasn’t until three years later that an MRI scan identified a low-grade non-cancerous brain tumour as the cause. Doctors operated immediately in January 2016 and were able to remove 60 per cent of the tumour. Poppy, who is now 13, has since recovered from surgery and returned to school at Fort Pitt, but still has regular scans to monitor the tumour.

Esther said: “I chose to run for Brain Tumour Research because the disease is so prevalent and yet not many people realise how underfunded research into brain tumours is. Poppy’s diagnosis was a horrible shock to everyone; it’s been especially hard for her mum Karen and dad Tony to go through. Poppy has been extremely brave throughout it all, and thankfully she is able to live the life of a normal teenager, but some children with brain tumours aren’t as fortunate.

“Poppy continues to raise money for research into the disease and has inspired me to now do my bit for the cause. I’ve been to the marathon before as an observer and really enjoyed it, and now I can’t wait to be joining the thousands of other runners taking on the race!”

Esther will be pounding the streets of the capital on Sunday 22nd April and Poppy and her family will be in the crowd cheering Esther along the way. The money she raises will go towards the pioneering charity Brain Tumour Research which funds a network of dedicated Centres of Excellence where scientists are focused on improving outcomes for patients and, ultimately, finding a cure.

Michael Thelwall, Head of Community Fundraising for Brain Tumour Research, said: “Brain tumours kill more children and adults under the age of 40 than any other cancer – and more children than leukaemia, yet just 1% of the national spend on cancer research has been allocated to this devastating disease.

“For too long, brain tumours have been a neglected cancer. Stories like Poppy’s remind us all that we cannot allow this desperate situation to continue. We are extremely grateful to Esther for her support and we wish her the best of luck for the marathon. Together we will find a cure.”

To make a donation to Brain Tumour Research via Esther’s fundraising page go to http://uk.virginmoneygiving.com/fundraiser-display/showROFundraiserPage?userUrl=EstMoore&pageUrl=1

For further information, please contact: Farel Williams at Brain Tumour Research on 01908 867221 or 07592 502708 or Farel.Williams@braintumourresearch.org