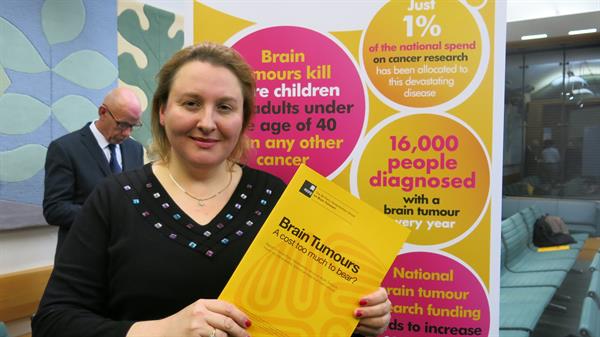 A woman who lost her beloved brother to a brain tumour was at Westminster as MPs heard of the unbearable burden of the disease.

The poignant words of Ashley Shameli’s sister Shardi are included in a hard-hitting report published on Tuesday 20 November, and presented to the All-Party Parliamentary Group on Brain Tumours (APPG-BT) at its meeting to launch the report.

Ashley was 22 and training to be a solicitor when he was diagnosed with a grade two astrocytoma brain tumour. He endured several operations and gruelling chemotherapy and radiotherapy. He outlived his prognosis but died at the age of 30 leaving his parents along with Shardi and their younger brother Shervin.

Towards the end of his life Ashley was cared for at the family home in Worcester and both Shardi and Shervin stepped back from their careers in order to be with him.

Shardi, who lives in Bow, East London, wrote: “The eldest of three children, I was six-and-a-half when Ashley was born and couldn’t be more proud to be the big sister to such a beautiful, happy little boy. My other brother Shervin arrived 18 months later and the three of us were extremely close to the extent that, when we moved to London for work, we lived together. We were together at the end too. I was working as a barrister and, like Shervin, I gave up my job to move back home to Worcester to care for Ashley in the final months of his life.

“Ashley had always been highly intelligent, a grade A student. We had no doubt, when he started law school, and then won a training contract with an international law firm, that he had an exciting career ahead of him. It was my saddest moment but greatest privilege to be at his side, holding his hand, when he died. He was just 30 and had so much potential. The pre-eminent surgeon Henry Marsh had given him exceptional treatment which meant Ashley lived for eight years after his diagnosis with a grade two astrocytoma. But even Mr Marsh couldn’t do anything more for him at the end.

“To see your brother go through such a horrible death was agonising. There were moments throughout Ashley’s diagnosis and treatment when we really had to stand up and fight for him, when it felt like threatening legal action was the only way to get people to take us seriously. Even at the end it was a struggle, the system didn’t seem able to properly cope with a palliative care plan for such a young man.”

Brain tumours – a cost too much to bear? is the report of a Parliamentary inquiry into the economic and social impacts of brain tumours which received more than 200 online submissions from patients and their families and comprehensive written submissions from charities and academics. It also held oral evidence sessions during June and July from researchers, doctors, surgeons, academics, representatives of drug companies as well as brain tumour patients of all ages and their families.

Its key findings include:

Sue Farrington Smith, Chief Executive of the charity Brain Tumour Research, said: “We are extremely grateful to Shardi and her family for their courage in sharing their very personal story which demonstrates why we must continue to highlight this issue and do everything we can to improve outcomes for brain tumour patients.