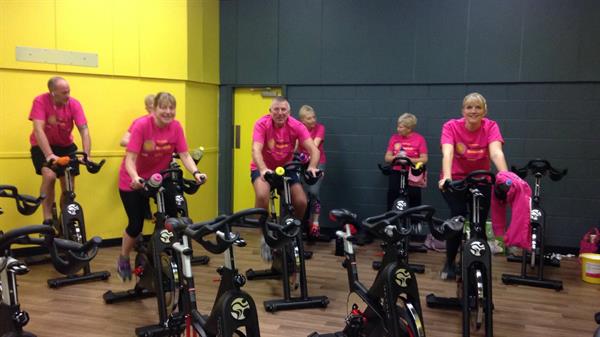 Two women whose friendship was forged by bereavement are joining forces to help scientists find a cure for the disease which killed their husbands.

Cathy Pratt, 58, from Horsforth, Leeds, and Maria Browne, 52, from Eccleshill Bradford, are now focused on raising money for research to find a cure for brain tumours. They are appealing for people to join them in a national spinathon challenge on Saturday 3rd February for the pioneering charity Brain Tumour Research.

Cathy and her husband Andrew had been married for 14 years when she lost him to a glioblastoma multiforme (GBM), a highly aggressive type of brain tumour. He passed away in March 2005 at the age of 41 leaving three children, aged 15, 21 and 27.

She shares a tragic bond with Maria whose husband Michael sadly passed away in February 2007 from an oligoastrocytoma which he had fought bravely for 20 years. The pair’s deep friendship has grown over the years after they met at a support group for people bereaved by brain tumours.

Cathy and Maria are taking part in On Yer Bike for Brain Tumours at Workhouse Fitness, Bagley Lane, Farsley, Leeds, and are appealing for people to join an army of supporters across the country who will be thundering through the miles on exercise bikes in return for sponsorship.

Money raised from the national event will fund vital research at a network of Brain Tumour Research Centres of Excellence where scientists are focused on improving outcomes for patients and, ultimately, finding a cure.

Brain tumours kill more children and adults under the age of 40 than any other cancer – and more men under 45 than prostate cancer - yet just 1% of the national spend on cancer research has been allocated to this devastating disease.

The pair will be taking part at They are aiming to reach a team target of £2,740 to fund a day of research at one of four Brain Tumour Research Centres of Excellence.

Carol Robertson, Community Fundraising Manager for Brain Tumour Research, said: “Sadly, brain tumours are indiscriminate and can affect anyone at any time. We’re challenging people to step up and ride for research! This is a fun event that all the family can get involved in and everyone taking part will be helping to make a difference.

“The money raised on the day will go towards research into the causes of brain tumours and improving treatments and ultimately finding a cure for this horrible disease. We would encourage anyone that would like to take part, to get in touch and register.”

The On Yer Bike initiative began as a local event and was inspired by Paul Halfpenny, 36, from Hadfield, Derbyshire. Paul and his wife Jen, 28, had been together for just a few months when he was diagnosed with a brain tumour. Together with their friends, the couple launched On Yer Bike and the campaign, which has so far raised £50,000. Unfortunately, six years after his diagnosis, Paul lost his battle against the tumour and passed away in 2014.

To register for On Yer Bike for Brain Tumour Research go to https://www.braintumourresearch.org/fundraise/on-yer-bike

We are campaigning to see the national spend on research into brain tumours increased to £30 - £35 million a year, in line with breast cancer and leukaemia. The charity is celebrating a year of high-profile campaigning on this issue following the unprecedented success of its petition in 2016. Following that, Brain Tumour

Research is now taking a leading role in the Government’s Task and Finish Working Group convened to tackle the historic underfunding for research.