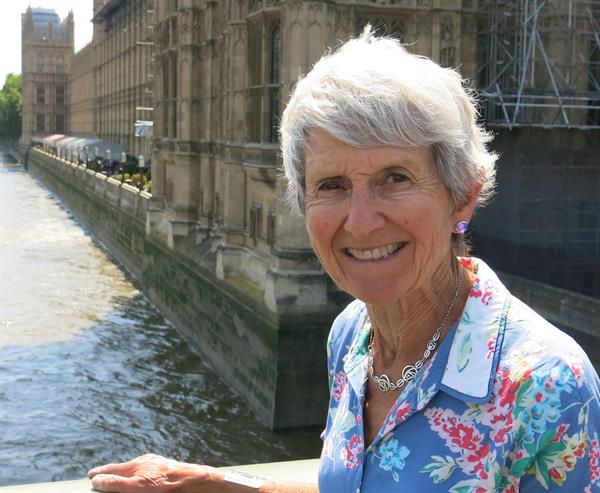 A grieving wife who lost her husband to a brain tumour has told a Westminster inquiry of the economic and social burden placed on their family by the harrowing disease.

Jenny Farthing, 70, from Winchester, was at Westminster on Tuesday 3rd July for the final evidence session of the All-Party Parliamentary Group on Brain Tumours (APPGBT).

Her husband Guy, a garden designer who had won eight coveted gold medals at Chelsea Flower Show, was diagnosed with a low-grade brain tumour at the age of 60. It was inoperable and Guy underwent radiotherapy and chemotherapy passing away nine years later in October 2017.

Jenny told the inquiry that in addition to the agony of Guy’s diagnosis, the couple had to bear costs of more than £30,000 in mobility aids, adaptations to their home, employing carers and lost holiday deposits. In order to care for Guy, Jenny gave up work and therefore lost her income, two-and-a-half years before his death.

She told MPs: “We had to move house to a location where the required facilities such as public transport, easy access to hospital, and ability to use a wheelchair safely were available and to a house which was easier for a disabled person to get around.

“All social activities had to be curtailed as it became more and more difficult for my husband to get out, especially when he could no longer get in and out of the car. To get around this we did a lot of entertaining but even this had to be cancelled at times due to his health and fatigue levels. I did leave him for a few hours at a time to continue some of my hobbies but these got cut back to almost zero in the last couple of months of his life.

“As Guy’s mental capacity deteriorated his world closed in around him. All he had was the TV and he found that increasingly difficult to understand. As his carer, I was making all the decisions and keeping all stress from him as he could no longer cope with it. There is a great deal of emotional and physical stress involved with caring for a brain tumour sufferer.”

Carrie Hume, Head of Public Affairs at the Brain Tumour Research charity, explained that “Too often the shock of a brain tumour diagnosis is compounded by loss of income, loss of a driving licence, loss of independence and ensuing financial insecurity. We need to spell out to MPs just what the real cost of a brain tumour diagnosis is. We really appreciate the courage Jenny showed in explaining her experience to the inquiry.”

Jenny was among 200 people who gave written submissions to the inquiry and one of 23 people including patients, relatives, charity representatives, scientists and clinicians, who spoke to the panel.