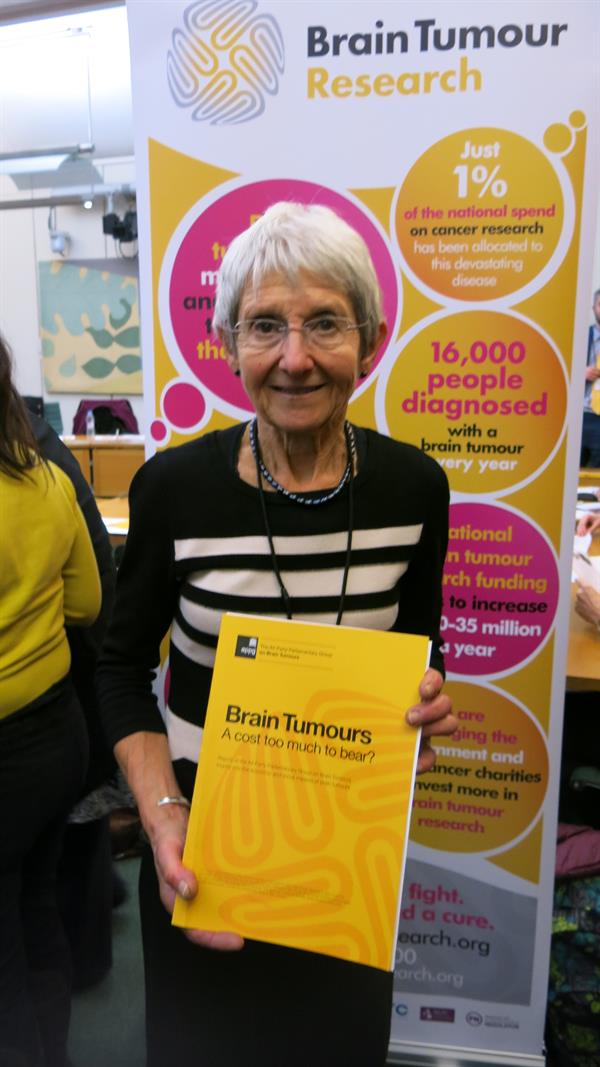 A Winchester woman who lost her husband to a brain tumour has told MPs of the heavy financial burden of the disease.

Jenny Farthing, 70, was at Westminster on Tuesday 20 November to tell her story to the All-Party Parliamentary Group on brain tumours as it held its AGM. And Jenny’s poignant story is also part of the group’s new report Brain tumours – a cost too much to bear?

The report on the economic and social impacts of brain tumours is the result of a Parliamentary inquiry which received more than 200 online submissions from patients and their families and comprehensive written submissions from charities and academics. It also held oral evidence sessions during June and July from researchers, doctors, surgeons, academics, representatives of drug companies as well as brain tumour patients of all ages and their families.

Jenny wrote: “My husband Guy had achieved such a lot with his career as a garden designer, medals at all the big shows including Chelsea and Tatton Park, and he had co-authored two books on garden design and maintenance with his father. He had just turned 60 when he was diagnosed. Nothing could have prepared us for what was to come, his steady deterioration over nine years and also the upheaval to our domestic arrangements and the financial as well as the practical challenges this brought with it.

“We incurred £50,000 in costs as we moved house to an area where there was better public transport and accessibility to hospitals. We spent around £10,000 on equipment to help Guy get around, £7,500 to make our home suitable and safe for him, lost £10,000 in deposits for holidays and so on. Fees for carers came to around £5,000 and, in order to care for Guy in his last two-and-a-half years, I had to retire early from a well-paid job. Our social life was hugely curtailed as it became more and more difficult for my husband to get out, especially when he could no longer get in and out of the car. We tried to entertain at home in order to get round this but often found ourselves cancelling as Guy was frequently unwell or too tired for visitors.

“During the last six months it became impossible for me to take any respite at all so I gave up my few hobbies to be with Guy as his mental capacity deteriorated and the world closed in around him. In the end it was too much for him to even understand the TV and, as his caregiver, I was making all the decisions in order to keep all the stress away from him as he simply couldn’t cope.”

Sue Farrington Smith, Chief Executive of the charity Brain Tumour Research, said: “We are extremely grateful to Jenny for her courage in sharing her very personal story which demonstrates why we must continue to highlight this issue and do everything we can to improve outcomes for brain tumour patients.