Widow at Westminster for launch of new cancer inquiry 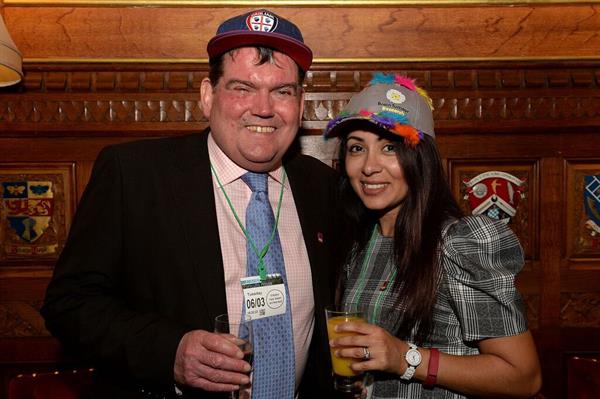 The widow of a man who was killed by a brain tumour was at Westminster for the launch of a new Inquiry into the economic and social impacts of the disease.

Shaz Hetherington joined other families, patients, campaigners, and charity workers at the invitation of the Rt Hon John Bercow MP, Speaker of the House of Commons and a Patron of the national charity Brain Tumour Research.

Shaz, from Woodford Green, was among the first to be invited to submit evidence on a web forum facilitated by the charity. Her husband David was just 39 when he died in November 2016, leaving two children, Layla aged six, and Daniel, three. The couple met when they worked at nearby desks at HSBC in Canary Wharf. Within months of their marriage in February 2010, David started experiencing his first symptoms and was initially diagnosed with a low-grade brain tumour which became high-grade over time.

Welcoming the Inquiry, Shaz said: “I think it is hard to fully understand the impact a brain tumour diagnosis has on your family unless you’ve been through it. It was tragic to think that David had to spend time and energy doing what he could to put our finances in order to make things as easy as possible for us after he had gone.

“At the stage where it became clear David was dying and there was nothing more which could been done, he was discharged from intensive care and I was advised to take him home and care for him myself. How was I to do that? Although he was terminally ill, at 39 David was too young for a nursing home and, ironically, not close enough to death for a hospice.”

In a nod to Wear A Hat Day, the fundraising campaign which takes place on Thursday 29th March, Caprice and other celebrity supporters including TV presenter Sarah Beeny, TV’s Instant Gardener Danny Clarke and celebrated milliner Noel Stewart, Shaz and HSBC colleague John Baker, a friend of David’s, donned their favourite headwear for a photo call.

Sue Farrington Smith, Chief Executive of Brain Tumour Research, said: "Brain tumours have been a neglected form of cancer for decades, killing more children and adults under the age of 40 than any other cancer. This Inquiry will shine a light on the social and economic impacts of brain tumours adding weight to our arguments and landing a huge urgency to our call for further funding to improve patient outcomes and offer much-needed hope to families.