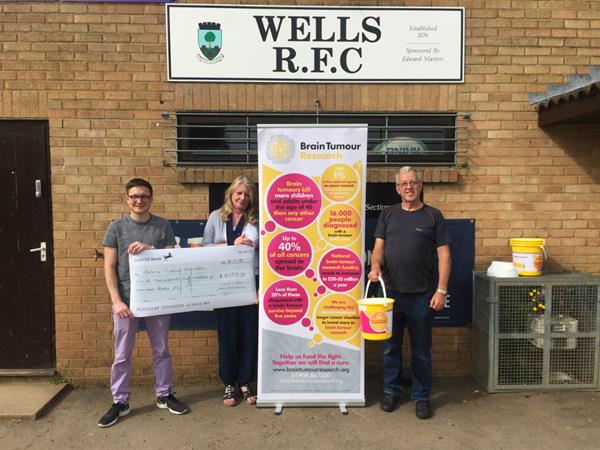 Close friends of a man from Wells, who died from a brain tumour, have held a charity match at Wells Rugby Club in his memory. This is the third charity match that friends and family have held with this year’s event raising £4,000 for pioneering charity Brain Tumour Research.

James Pullen, a self-employed plasterer and keen fisherman, began experiencing episodes of déjà vu in 2009. When seizures followed, James was taken to the hospital and tests revealed in February 2010 that he had a grade three anaplastic astrocytoma tumour. Aged only 22 at the time, James underwent surgery and radiotherapy which successfully shrunk the tumour. However, over the course of the next six years, the tumour recurred twice and despite further surgery and months of chemotherapy, James lost his battle and died in December 2015, aged 28.

Tom Corns, close friend and organiser of the event, said: “James is sorely missed here at the rugby club and I still can’t believe we won’t get to hear his infectious laugh again. I organised the match because I wanted to remember him in a fun way, and also to raise funds for research into the disease. It’s appalling that brain tumours kill more children and adults under the age of 40 and yet such little funding is allocated to research into a cure.”

Sarah Pullen, James’ mother, who attended a cheque presentation to Brain Tumour Research along with her husband David, said: “James enjoyed playing rugby when he was younger and made many lasting friendships through the game. It’s touching to see how these fundraisers have brought together not only his rugby friends, but his friends from fishing, school, and work too.

“James hated being the centre of attention but it was clear that he left a big hole not only in our family but the lives of his friends too. My wish is that James’ story inspires change and that one day a cure is found for this cruel disease.”

Brain tumours are indiscriminate; they can affect anyone at any age. What’s more, they kill more children and adults under the age of 40 than any other cancer, and more men under 45 than prostate cancer, yet just 1% of the national spend on cancer research has been allocated to this devastating disease.

Emma Cronin, Community Fundraising Manager for Brain Tumour Research said: “We are extremely grateful to James’ friends and family who have come together to fundraise in his memory. Stories like James’ remind that we cannot allow this desperate situation to continue.

The money raised will help us in our mission to build a network of experts in sustainable research. We are funding dedicated UK Centres of Excellence where scientists are focused on improving outcomes for patients and, ultimately, finding a cure.”