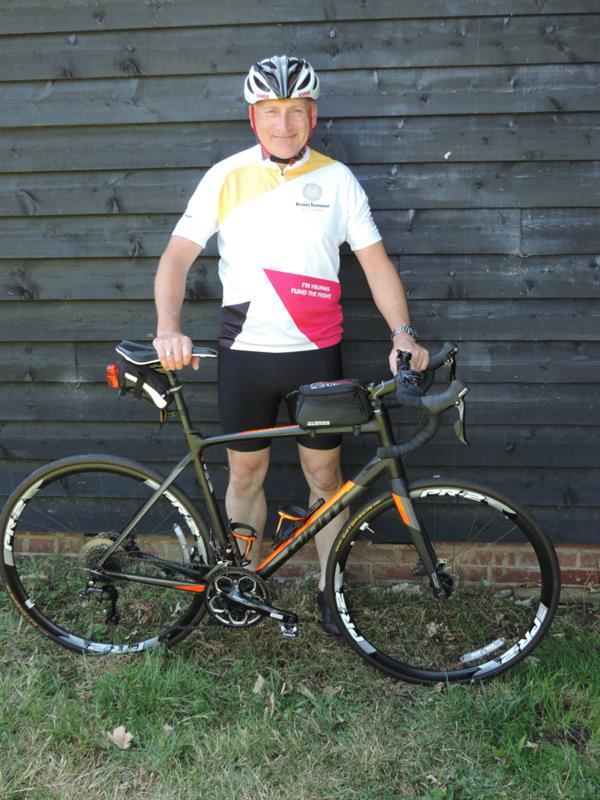 Michael Barltrop is in training for a gruelling 100-mile cycle ride later this month to raise funds for research to find a cure.

Michael, aged 55, of Wareside, is a recently retired Police Officer and is rediscovering the enjoyment of cycling from his younger days.  He has been inspired to take on this challenge having lost his cousin, Peter Barltrop (who lived near Dunstable, Beds) to a brain tumour less than a year ago, soon after his 60th birthday.

Michael aims to raise £1000 for pioneering charity Brain Tumour Research. Brain tumours kill more children and adults under the age of 40 than any other cancer but just 1% of the national spend on cancer research has been allocated to this devastating disease. The charity is striving to fund a network of seven dedicated research centres whilst challenging the government and larger cancer charities to invest more in brain tumour research.

Michael is among 24 cyclists supporting the charity by taking part in Prudential RideLondon, described as “the world’s greatest festival of cycling.” Some 25,000 are expected for the RideLondon-Surrey 100 mile sportive which will set off from the Queen Elizabeth Olympic Park in east London on Sunday 30th July before heading through the capital and out into the Surrey countryside and returning to the finish on The Mall.

Peter endured a series of seizures, a bleed on the brain and subsequent surgery before he was diagnosed with a grade 4 glioblastoma multiforme brain tumour in 2014.  He passed away in August last year, leaving his wife Jane and daughters, Alice and Emma heart-broken.  Shocked at the woeful underfunding of research, Peter’s immediate family have set up a fundraising group under the umbrella of Brain Tumour Research, known as Fluffy Cloud & Co in Peter’s memory.

Michael said: “Brain tumours are one of the least understood cancers. No one knows what causes them and they can affect anyone with devastating results, particularly the young. I also know two children of friends and relatives who have suffered from brain tumours, but have fortunately survived. There is far less resource dedicated to researching brain tumours than other cancers, meaning possible treatments are not being developed.  I hope my efforts will help raise awareness of this dreadful and indiscriminate disease and the unjustified under-funding of research which has gone on for far too long.”

Carol Robertson, Head of Community Fundraising for Brain Tumour Research, said: “For too long, brain tumours have been a neglected cancer. Stories like Peter’s remind us all that we cannot allow this desperate situation to continue. We are extremely grateful for Michael’s support and wish him well.”

To make a donation to Brain Tumour Research via Michael’s JustGiving page, go to www.justgiving.com/fundraising/Michael-BARLTROP