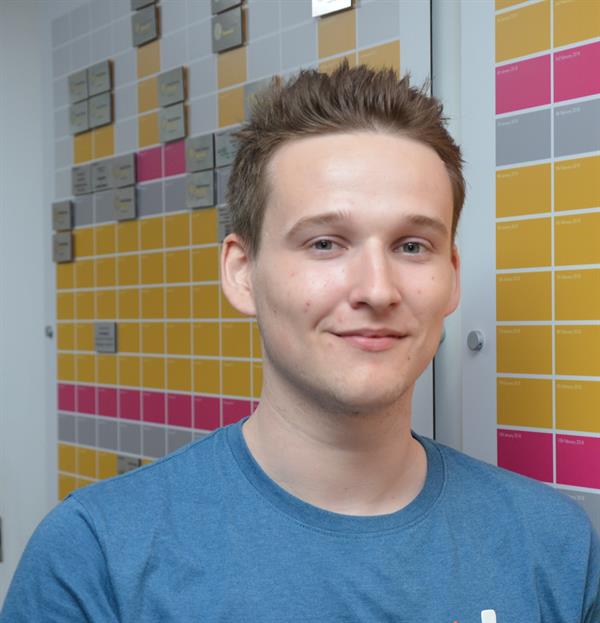 A university graduate has helped to raise over £2,000 for a charity which funds research into the disease which killed his father.

Two weeks after his last day as a student, and six years on from his dad’s death, Michael’s fundraising efforts were acknowledged at the Centre of Excellence. Along with his mum, Juliet, and brother, Jamie, Michael was invited to place a tile on the Wall of Hope with each tile representing the £2,740 it costs to fund a day of research.

Nigel Legg, from Sonning Common in Oxfordshire, began to experience balance issues and severe neck pain in early March 2012. By the end of the month, his legs were giving way, he was disorientated and he struggled to keep food or water down. GPs prescribed painkillers and anti-sickness medication until Nigel was eventually referred for an MRI scan in April which revealed a grade 4 glioblastoma multiforme (GBM), the most aggressive type of brain cancer. Nigel, a software engineer for Three in Maidenhead, immediately underwent surgery to remove part of the tumour but sadly it grew rapidly over the weeks that followed, taking over almost half of his brain. On 10th June, one day before he was due to start chemotherapy and radiotherapy, Nigel died, leaving his sons, Michael and Jamie, and wife, Juliet.

Since Nigel’s death, the Legg family have raised over £6,000 for the Brain Tumour Research charity, through a variety of events including fundraising walks and the charity’s annual Wear a Hat Day event. Michael said: “Visiting the lab and placing a tile on the Wall of Hope has been a significant moment as I know dad would be really proud. Vital research is taking place here and it’s extremely important to me that it continues as this is the only way a cure can be found.”

Jamie Legg, 18, is also following in his dad and brother’s footsteps by electing to study computer science at the University of Portsmouth, where another of the Brain Tumour Research Centres of Excellence is based. The Legg family placed their first tile in Nigel’s memory here in 2013.

Juliet, who works as an Information Researcher at Thales in Reading, said: “Fundraising for research into brain tumours is a cause extremely close to my heart and I’m so proud of my sons for helping to raise money too. It’s touching that we now have a tile placed for Nigel at both our sons’ universities.”

According to the Brain Tumour Research charity, less than 20% of those diagnosed with a brain tumour survive beyond five years, compared with an average of 50% across all cancers.

Michael Thelwall, Head of Community Fundraising for the Brain Tumour Research charity, said: “We are really grateful to Michael, Juliet and Jamie for raising vital funds to support important research into a disease which affects so many people and their families each year. Stories like Nigel’s remind us all that we cannot allow this desperate situation to continue.”

To make a donation to Brain Tumour Research go to: https://www.braintumourresearch.org/donation