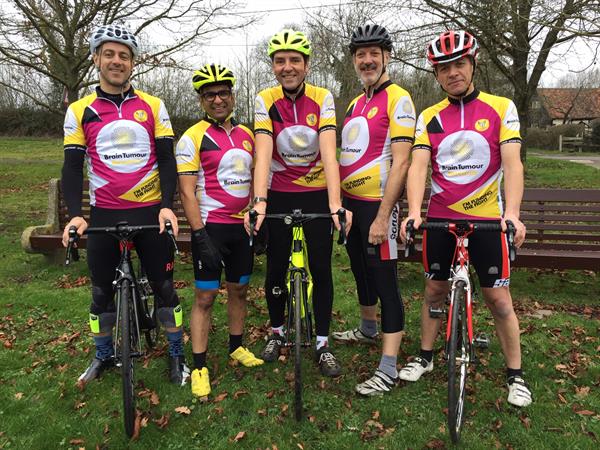 Six cyclists are clipping in for charity and aiming to ease the pain of hundreds of training miles by raising funds to help fight brain cancer. The determined half dozen is one of the first teams to sign up for the Brain Tumour Research charity’s On Yer Bike event.

And the guys hope to raise £2,740, the equivalent of one day of research at one of a network of Brain Tumour Research Centres of Excellence where scientists are focused on improving treatments for brain tumour patients and, ultimately, finding a cure.

The Nash-based team made up of Richard Castle-Smith, Andy Thirtle, Chandra Shekar, David Pugh, Steve Filler and Guruprasad Sethurathinam is in training for the gruelling Mallorca312 in April. Over the next few months they will each be clocking up many miles on road bikes and turbo trainers as they get into shape for the event which is one of the world’s biggest and toughest endurance events in the sportive calendar.

They have been inspired to support On Yer Bike by ex-National Road Race Champion Phil Corley whose Milton Keynes-based business is one of the UK’s leading independent cycle retailers. Phil has a very personal reason to support the campaign as he lost his own brother to the disease. Richard Corley was just 44 when he died, leaving a wife and two small children.

Taking place in February, On Yer Bike is a chance for everyone from committed cyclists – like Phil and the Nash4Mallorca team who are used to putting in high mileage as they train for the summer’s calendar of cycling events – to those more used to the odd spinning class at the gym or cycling as a family, to get involved and raise money for a great cause. Participants select a sponsorship target, set up a fundraising page and can then track their performance, keeping an eye on their ranking on the national leader board, to see who will cover the most miles from 1 February to 23 February.

Brain tumours kill more children and adults under the age of 40 yet, historically just 1% of the national spend on cancer research has been allocated to this devastating disease and MK-based Brain Tumour Research is proud to be changing this. On Yer Bike has been running since 2012 when it was launched as a local event by brain tumour patient Paul Halfpenny from Derbyshire. Sadly, Paul passed away in 2014 but the event continued and now takes place nationwide.

The 2019 event is expected to be popular with road cyclists, and particularly those who are training for the big events as this year, for the first time, participants can track their progress on an all-new website www.onyerbikechallenge.org. Cyclists upload training and event mileage from their wearable technology and so compete against each other on an individual and team basis.

Phil said: “As a generally competitive breed, I think cyclists are going to really appreciate the new element of the campaign as they will be able to see how their performance compares with others taking part.

“Like the Nash4Mallorca team, many cyclists may well be putting in lots of mileage during February as they prepare for upcoming events and I would ask them to register and take part in On Yer Bike. It’s a great way of raising money for such an important cause and perhaps it will give them some increased motivation as well. Sadly, brain tumours are indiscriminate and can affect anyone at any age. They are all too prevalent and many people, like my own family, have been affected by this cruel disease.”

Team captain Richard Castle-Smith said: “Sadly, brain tumours affect many people and we are proud to be supporting this worthy cause. The knowledge that we are giving hope to patients and their families will be a great motivator as we put in the many hours of training which we are going to need in order to complete the Mallorca ride. I hope that people will consider donating as this will be very much appreciated.”

Brain Tumour Research funds sustainable research at Research Centres of Excellence in the UK; it also campaigns for the Government and the larger cancer charities to invest more in research into brain tumours in order to speed up new treatments for patients and, ultimately, to find a cure. The charity is calling for an annual spend of £35m in order to improve survival rates and patient outcomes in line with other cancers such as breast cancer and leukaemia.

To sponsor the team and follow progress go to https://onyerbike.everydayhero.com/uk/nash4mallorca312

The Brain Tumour Research charity is a powerful campaigning organisation and represents the voice of the brain tumour community across the UK. We helped establish and provide the ongoing Secretariat for the All-Party Parliamentary Group for Brain Tumours (APPGBT) which published its report Brain Tumours A cost too much to bear? in 2018. Led by the charity, the report examines the economic and social impacts of a brain tumour diagnosis. We are also a key player in the development strategy for the Tessa Jowell Brain Cancer Mission.