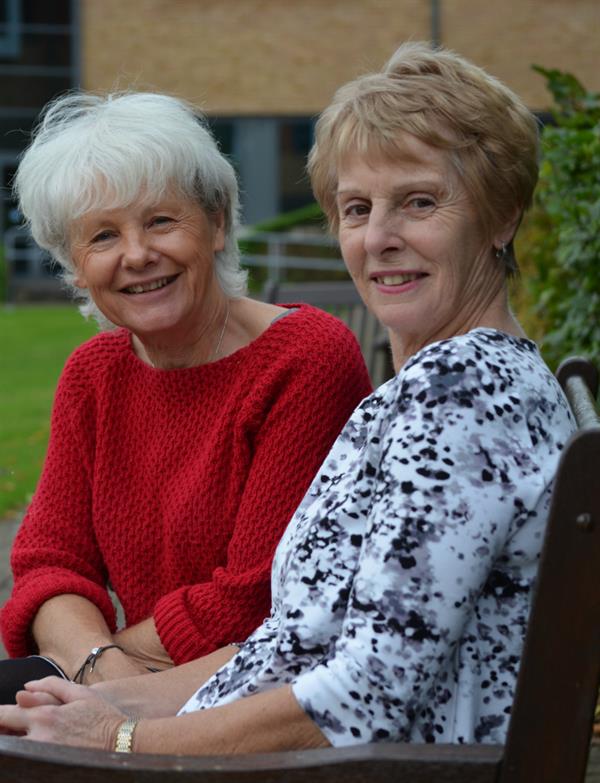 Two women, both of whom have been affected by aggressive brain tumours, one personally and one through her husband, attended the UK Brain Tumour Symposium in Milton Keynes on Thursday, 12th October.

Tanya Malpass, 63 (64 on 18.10.17) of Weston Turville and Barbara Barnes, 78, of Quainton were both eager to hear about advances being made in the world of brain tumour research and support.

Tanya was diagnosed with a high-grade glioblastoma multiforme (GBM) brain tumour in March 2015 after finding she had started talking in spoonerisms. She underwent surgery to remove as much of the tumour as possible, followed by radiotherapy and chemotherapy.

Barbara lost her husband, Phil, aged 63, to a GBM in 2010, less than a month after diagnosis. Added to this tragedy, one of their daughters’ brothers-in-law had passed away a few months prior to Phil, also as a result of a brain tumour; and if this was not enough for one family, Barbara’s brother, Nigel Mabbett, of Stoke Mandeville was diagnosed in March this year, aged 59, also with a grade 4 GBM. Now, 60, Nigel has had two major operations, radiotherapy and is just about to embark on a second bout of oral chemotherapy. He is realistic as he knows his survival is very limited, but according to Barbara: “is really positive and outwardly amazingly cheerful.”

Tanya, who has remained positive throughout and writes a blog to inform and encourage others at www.bobtheblogsblog.com, said: “I am convinced that hope and expectation are very powerful treatments, without which even the best medical care can easily fail. I was given a survival prognosis of 12 to 18 months, yet three years on I am tumour free and living life to the full. Seeking new treatments and offering support and encouragement are vital to keep hope alive for patients like me.

“Research into this disease is really important. Both Barbara and I know that brain tumours can affect anyone at any age, but no one knows what causes them.  It is only right that the national spend on research into brain tumours should be increased to £30 - £35 million a year, in line with breast cancer and leukaemia.”

Barbara commented: “I can’t believe how badly our family has been affected by brain cancer – three members, including my husband and brother, and none of them blood relatives.

“It was comforting to hear that advances are being made, although any improvements in treatment are all far too late for Phil. I am determined to continue to raise awareness to help bring about better outcomes for patients so that other families in the future don’t have to go through what we have. Life will never be the same again without Phil. We won’t rest until there is a cure.”