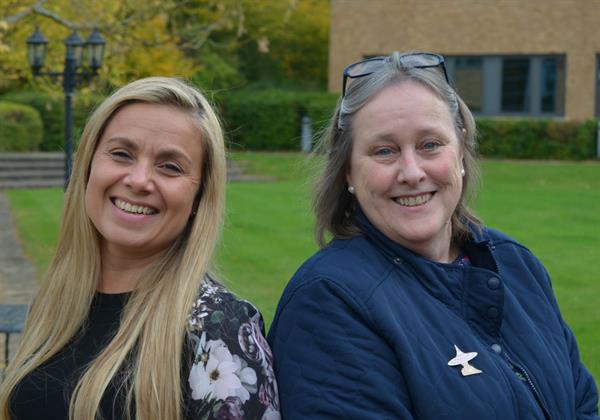 Two mothers, both of whose families have been devastated following the diagnosis of sons with aggressive brain tumours, attended the UK Brain Tumour Symposium in Milton Keynes on Thursday, 12th October.

Figen Rawlinson, 41, of Calvert Green and Jayne Hilsdon, 55, of Buckingham were both eager to hear about advances being made in the world of brain tumour research. Figen lost her eldest son Taylan less than a year after he was diagnosed with an inoperable brain tumour on the brain stem in 2008. He was just seven years old. Jayne heard the heart-breaking news just after Christmas 2014, that her beloved son Oli, then 22, had been diagnosed with an incurable brain tumour. Following chemotherapy and radiotherapy, Oli, has had innovative immunotherapy treatment and is currently doing well, although he and his family know his future is uncertain.

Founder and Director of Services at brainstrust, Helen Bulbeck, spoke eloquently about living well with a brain tumour, improving quality of life and supportive care, while Head of Public Affairs and Campaigning at Brain Tumour Research, Carrie Hume, demonstrated how the charity is working with Parliamentarians to influence cancer policy at the highest levels as it campaigns to increase national investment for research into brain tumours.

Jane, said: “Research into this disease is really important to me. Both Figen and I know that brain tumours can affect anyone at any age, but no one knows what causes them.  I was the proudest mum when Oli – the first in our extended family to go to university – graduated from Cambridge with a First and then landed an amazing job with Blackstone, an American Private Equity company in London. Just a year later he was diagnosed with the type of brain tumour which normally has a survival prognosis of 12 to 18 months. It is only right that the national spend on research into brain tumours should be increased to £30 - £35 million a year, in line with breast cancer and leukaemia.”

Figen commented: “Brain tumours kill more children and adults under the age of 40 than any other cancer, yet just 1% of the national spend on cancer research has been allocated to this devastating disease.

“It was comforting to hear from scientists that advances are being made, although any improvements in treatment are all far too late for Taylan. I am determined to continue to raise awareness to help bring about better outcomes for patients so that other families in the future don’t have to go through what we have. Life will never be the same again without Taylan. There will always be that part of our family missing. We want revenge on this disease and we won’t rest until there is a cure.”