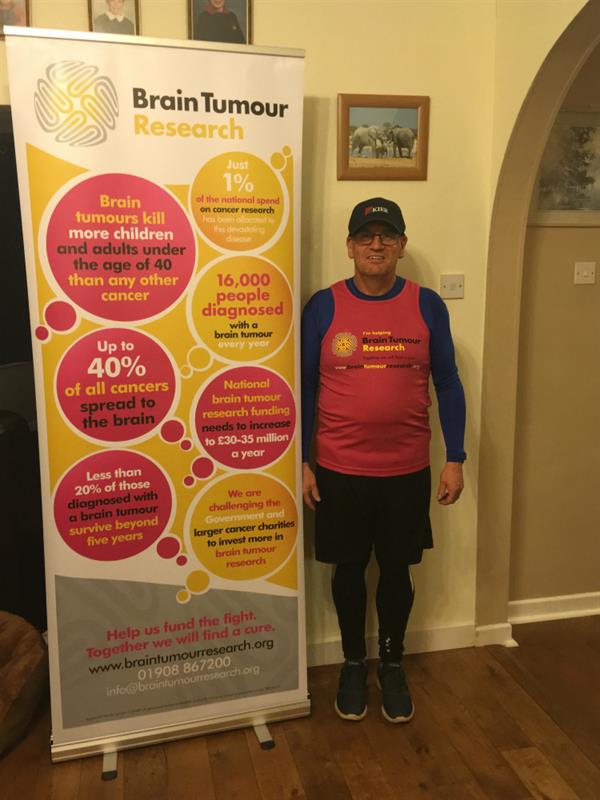 A dad-of-three from Torquay is set to run the Plymouth Half Marathon despite a hip condition that has plagued him since his teens.

Jon Woodmore discovered he had Perthes Disease at the age of 17 when severe pain in his hips prevented him from boxing. The condition affects blood supply to the hips, causing persistent pain and eventually restricting movement. Jon, who is now 52, has had two hip replacements to repair the damage and is now challenging himself to complete the 13.1-mile race and raise money for pioneering charity Brain Tumour Research.

His run is inspired by his wife’s brother, Keith Harvey, also from Torquay, who was diagnosed with a brain tumour in January 2018 following a series of seizures. Aged only 49, Keith, who works as a healthcare assistant at Torbay Hospital, was told he had a grade four tumour. He had surgery soon after to remove the tumour, however, parts were inoperable and remain highly aggressive. Keith has since undergone radiotherapy and chemotherapy to control the tumour’s growth and he is now awaiting a prognosis.

Jon said: “Keith’s diagnosis has put everything into perspective and inspired me to get out there and do whatever I can. I hated running up until a few months ago and always let my hips hinder me but running has given me a new lease of life. I’ve lost two stone and I’ve even got my sights set on the London Marathon next year.”

On Sunday 20th May, Jon will be pounding the streets of Plymouth alongside thousands of runners. The money he raises will go towards Brain Tumour Research’s network of dedicated Centres of Excellence – including the one at the University of Plymouth – where scientists are focused on improving outcomes for patients and, ultimately, finding a cure.

Jon added: “Keith’s illness has been really hard on everyone that knows him. His wife Michelle and their three kids are finding it especially difficult to come to terms with the fact this disease is life-limiting.

“I want to raise a minimum of £1,000 through the Half Marathon but my ultimate aim is to raise £2,740 and fund a day of research into the disease.”

Brain tumours kill more children and adults under the age of 40 than any other cancer – and more men under 45 than prostate cancer, yet just 1% of the national spend on cancer research has been allocated to this devastating disease.

Jon, who works as an Aftercare Manager at Kier Group, added: “I first came across Brain Tumour Research when I was working on a job at the University of Plymouth. The charity has a research centre based there and I was really touched seeing all the tiles on the Wall of Hope.”

Emma Cronin, Community Fundraiser for Brain Tumour Research, said: “For too long, brain tumours have been a neglected cancer. They are indiscriminate and they can affect anyone at any age. Stories like Keith’s remind us all that we cannot allow this desperate situation to continue.

“We are extremely grateful to Jon for his support and wish him the best of luck for the event. Together we will find a cure.”