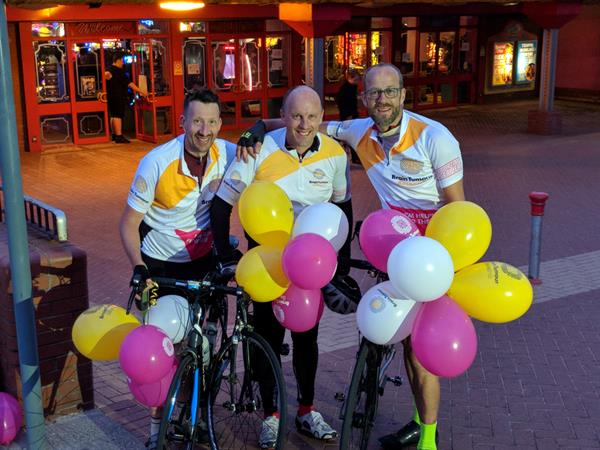 A man with an incurable brain tumour has completed a 400km cycle ride, along with two friends, from the pier at Weston-super-Mare to Walton-on-the-Naze pier in Essex in just over 24 hours to raise vital funds for the Brain Tumour Research charity.

The trio, who all grew up together in Bath and are fellow parishioners of St Philip’s and St James’ Church in Odd Down, were Andrew Stammers, a part-time Evangelist there (although he now lives in Radstock) and Dan Jones and Dave Atkinson, both of Odd Down. They completed the pedal-power challenge soon after 9pm on Friday 15th June, having set out the previous day at around 8pm and cycled through the night.

Andrew was diagnosed with an aggressive brain tumour in 2011 after suffering a seizure. Then a Baptist minister in Radstock (where he now lives), Andrew underwent wide-awake surgery to minimise the risks of long-term effects because the tumour was very close to his speech and understanding sensors.  He was told that the likelihood was that the tumour would grow back in one to two years.

Having also undergone six weeks of radiotherapy, Andrew has mercifully survived well beyond the two-year milestone he was initially given. Each year on his birthday he sets himself a fundraising challenge to celebrate surviving another year.

Brain tumours kill more children and adults under the age of 40 than any other cancer, yet just 1% of the national spend on cancer research has been allocated to this devastating disease

Andrew commented: “We set off from a very windy and chilly Weston-super-Mare, but thankfully, as we rode inland and darkness fell, it seemed to get a lot warmer and the wind dropped too. For the rest of the ride the weather was perfect.

“It was great to call into the Brain Tumour Research charity’s headquarters in Milton Keynes just over the half-way mark to refuel with a late breakfast and meet members of the team.

“The last 15 miles or so were very tough for me. I have never felt so pleased to see a pier and our two support team members in their Brain Tumour Research pink t-shirts, as when we reached the finish at Walton-on-the-Naze!

“I am so grateful to everyone who has sponsored me. The Pier-to-Pier cycle has so far raised almost £1,700, which is amazing and will help to find more effective treatments and ultimately a cure for brain tumours.”

Dave Atkinson who co-owns Road CC – a website dedicated to cyclists – added: “Andy was awesome. It was only at the very end that he started to struggle. Everything went perfectly and we only had two punctures between us the whole way!”

Emma Cronin, Community Fundraising Manager for the Brain Tumour Research charity, said: “Brain tumours are indiscriminate; they can affect anyone at any age, at any time. Moreover, less than 20% of those diagnosed with a brain tumour survive beyond five years compared with an average of 50% across all cancers.

“We are extremely grateful to Andy for his continued fundraising for our charity and to everyone who has donated in support of Andy’s endeavour. Together we will find a cure.”

The money raised will go towards ground-breaking national charity Brain Tumour Research which funds a network of dedicated Centres of Excellence where scientists are focused on improving outcomes for patients and, ultimately, finding a cure.

To make a donation go to www.justgiving.com/fundraising/andrew-stammers9