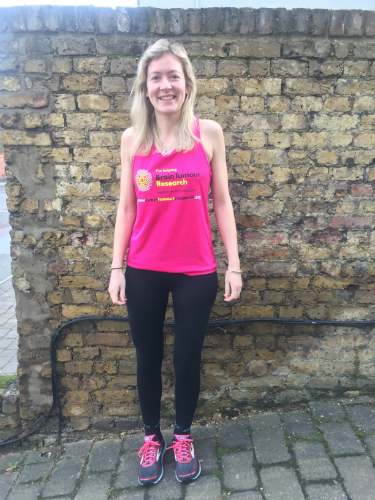 A family trio from Gressenhall are in training to run the London Marathon in memory of Brian Cross who passed away from a rare form of brain cancer in 2006, aged 62.

Rosie, 28, and Tom Cross, 26, Brian’s children from his second marriage to Sally, along with their step-father Rob Hensen, 53, will be pounding the streets of the capital to raise money for the pioneering charity Brain Tumour Research, which is funding world-leading research to find a cure for the disease.

Brian was a well-respected local businessman, entrepreneur and former mayor until he was diagnosed with a lymphoma which, because it was on the brainstem, was declared inoperable. Despite radiotherapy and chemotherapy treatment, Brian passed away just nine months after his diagnosis.

Shocked that less than 20% of those diagnosed with a brain tumour survive beyond five years compared with an average of 50% across all cancers, Sally, along with Rosie, Tom and Camilla (Brian’s daughter from his first marriage) set up the Brian Cross Memorial Trust. They gave themselves a target of raising £1million to help fund vital research into identifying better treatments and ultimately a cure. To date the Trust has raised more than £835,000, which has included a donation of £120,000 in 2015 to fund a research nurse over a three-year period at Brain Tumour Research’s Centre of Excellence within Imperial College in London.

Tom, who in the last month left the Marines after a four-year stint and is currently training in property in order to return to Gorgate Property Ltd, one of the companies his dad set up, commented: “Dad wasn’t much of a runner, but he always loved a challenge. He would be very proud of what the three of us are doing in his memory.

“My step-father, a retired teacher and head of mathematics at Gresham School, is an amazing guy – it’s great to have had him on the team ever since Mum and he got together, but it has never meant that Dad is less of a person in our lives. Rob understands how important Dad was to us and still means to us.

“We are looking forward to stepping up to the mark and are focusing on getting marathon fit. I have huge respect for runners fitting in the time to train around work and family commitments.

“Rosie already has experience of running a marathon, having completed the Berlin – although I tell her it doesn’t count because it was all downhill! Rob has always been a runner, so he won’t have too much to worry about apart from avoiding getting injured before the big day.

“I, on the other hand, have never run a marathon, although in the Marines I was used to covering long distances. It will be nice to be running without a heavy backpack or someone swearing at me!” I am hoping to complete the marathon in under 3 hours 30 minutes.

Sue Farrington Smith, Chief Executive of Brain Tumour Research, said: “Brian was a personal friend of my husband Justin and our families have spent many good times together. I remember feeling so helpless when Brian was diagnosed and having also lost my sister’s little girl Alison Phelan to a brain tumour five years earlier, his loss in 2006 strengthened my resolve to make a difference and find a cure.

“I am delighted that Rosie, Tom and Rob and the Brian Cross Memorial Trust have joined us and our many supporters whose hard work and dedication are helping us to fund the fight.

“For too long, brain tumours have been a neglected cancer. Experiences like Brian’s remind us all that we cannot allow this desperate situation to continue. We are extremely grateful to Rob, Rosie and Tom for their support. Together we will find a cure.”

To make a donation to Brain Tumour Research via the Cross family’s JustGiving page go to www.justgiving.com/fundraising/rosie-begg