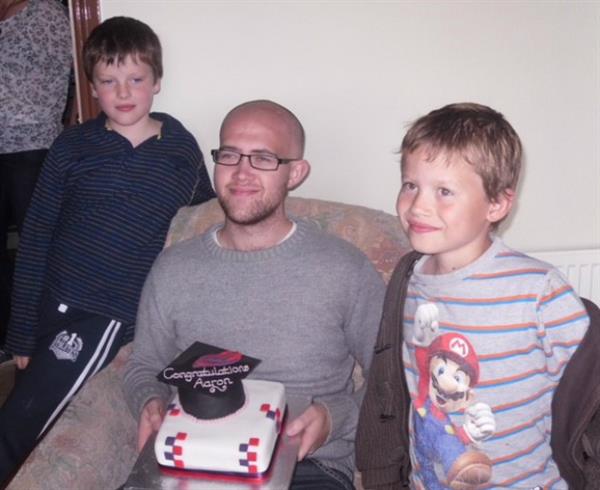 Schoolboy Matthew Wood has raised more than £500 for charity in memory of his cousin who was lost to a brain tumour.

Matthew, aged 10, cycled 100 miles for the national charity Brain Tumour Research and the funds he has raised will go towards vital research into the disease which claimed the life of his cousin Aaron Wood.

Aaron, a student from Catcliffe, Rotherham, died in December 2016 at the age of 24. Brain tumours kill more children and adults under the age of 40 than any other cancer yet just 1% of the national spend on cancer research has been allocated to this devastating disease. Matthew, of Great Sankey, Warrington, was determined to do his bit to help redress the balance. Originally setting off on his bike to raise £100, he finished his 100-mile challenge with more than five times that thanks to the generosity of friends and family.

His mum Cathy, said: “We are so, so proud of him. He started in August and completed most of his rides in September. His challenge took him off-road, along cycle trails and he also got to ride at the Manchester velodrome which he absolutely loved.

“He was accompanied by either me or his dad, his brother Joseph and also his grandad so it’s been a bit of a team effort although Matthew was the only one who completed the whole 100 miles.”

Matthew is a member of the 7th Warrington Cub Scouts and chose to do the charity event as part of his Chief Scout’s Silver Award.

Aaron underwent surgery and radiotherapy and managed to go back to university to complete his studies and graduate with a 2:1 in philosophy. His dying wish, for scientists to use his brain to further their knowledge of brain tumours, was fulfilled.

Suzanne McKenna, Head of Community Fundraising for Brain Tumour Research in the north, said: “We are enormously grateful to Matthew for undertaking this wonderful challenge in memory of his cousin Aaron. The money will be used to fund scientists at a network of Brain Tumour Research Centres of Excellence where the focus is on improving treatments for patients and, ultimately, finding a cure.”

To make a donation to Brain Tumour Research via Matthew’s JustGiving page go to https://www.justgiving.com/fundraising/mark-wood33