Tadworth Variety Show fundraiser for neglected cancer brings Banstead fundraising group’s total to over £20,000 in under a year 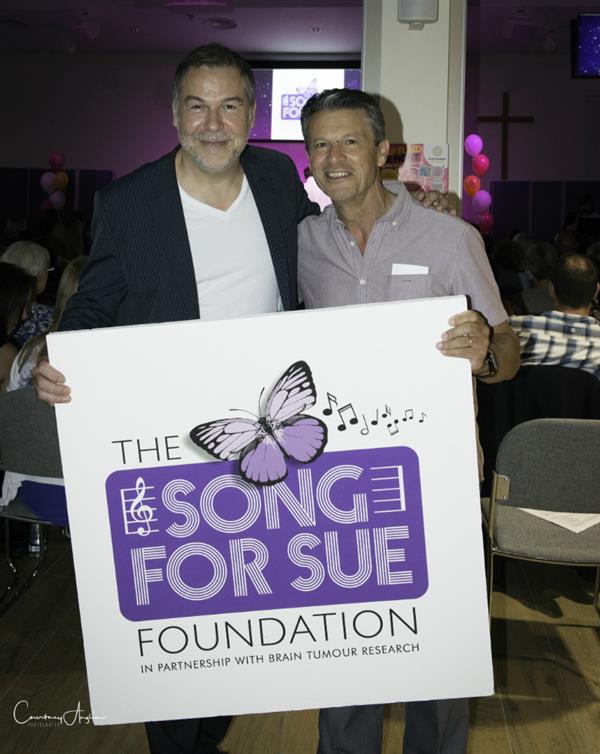 A Variety Show held in Tadworth earlier this month and organised by the family of a Banstead wife and mother who passed away from a brain tumour, has raised more than £2,200.

The Song for Sue Foundation, a fundraising group under the umbrella of game-changing national charity, Brain Tumour Research, was set up by David Thomas of Acorn Close, Banstead and his daughters Rachael Thomas (of Motspur Park) and Holly Still (of Banstead), along with son-in-law Lewis in November last year. To date The Song for Sue Foundation has raised more than £20,000 in memory of Sue who passed away in December 2015 aged 57, before she was able to meet her two grand-daughters born in January and May 2016.

The Variety Show at Merland Rise Church attracted a range of acts, including No Limits, a Gospel band from West London and Sutton and Steve Brookstein from Mitcham, who was the first ever winner of ITV’s the X Factor.

David said: “It was an amazing night with wonderful feedback from the people who came.  I particularly want to thank all the acts who took part, Lewis for his hard work bringing the acts together and Merland Rise Church for their not inconsiderable help.

“We used the opportunity to raise awareness and asked for donations and also held a raffle.  People were very generous. I spoke to a number of people on the night who had brain tumours themselves or who had friends or family with this devastating disease.

“When Sue was diagnosed we discovered that just 20% of brain tumour patients survive five years, which compares with an average of 50% across all cancers, yet just 1% of the national spend on cancer research has been allocated to brain tumours. Sue survived less than two and a half years after diagnosis. We are striving to help make a difference and so we are delighted that the monies we have raised to date will sponsor seven days of research.”

Steve Brookstein commented: “I was delighted to be involved in the Variety Show. It was shocking to hear how poor survival rates are for brain tumour patients. For the sake of the thousands of families each year that are given the terrible news that a loved one has been diagnosed, I hope that more effective treatments and ultimately a cure are discovered quickly. I have huge admiration for Sue Thomas’s family for what they are doing in her memory.”

Tim Green, Fundraising Manager for the South East, said: “David and his family are totally committed to helping raise awareness and funds for research. Brain tumours kill more children and adults under the age of 40 than any other cancer, so it is vital that greater funding is found to increase research into this neglected area.”

Brain Tumour Research is campaigning to see the national spend on research into brain tumours increased to £30 to £35 million in line with breast cancer and leukaemia.

The next event for The Song for Sue Foundation will be a Dinner Dance on 11th November at the Surrey Downs Golf Club, following the huge success of their first Dinner Dance held a year previously. Tickets priced at £50 each are expected to go quickly. For information email dbthomas@hotmail.co.uk

To donate to The Song for Sue Foundation go to www.justgiving.com/fundraising/songforsue