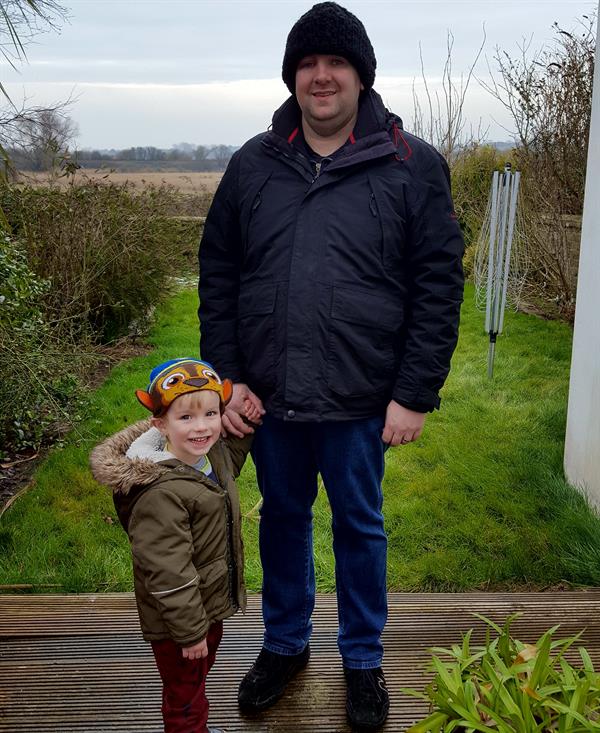 Supermodel Caprice has sent a touching video message to a brain tumour patient from East Sussex.

Graham Wood, aged 33, and his four-year-old son Reuben are working with the national charity Brain Tumour Research to support this year’s Wear A Hat Day which takes place on Thursday 29th March.

But the “best from the east” meant that the father and son were unable to travel from Pevensey to the charity’s HQ in Milton Keynes to meet Caprice, a survivor of the disease, for the official launch on Saturday 3rd March.

Graham is living with an anaplastic astrocytoma; a grade three brain tumour. Since his diagnosis nearly four years ago, he has undergone surgery, radiotherapy and chemotherapy. Along with his wife Amber, aged 34, Graham previously ran a newsagents in St Leonards-on-Sea but was forced to give the business up because of the tumour.

Graham, whose diagnosis followed a motorbike crash, said: “We were so sorry to miss the event but couldn’t risk it with the weather. Reuben was sorry he didn’t get to go on the train and we were both sorry not to meet Caprice! It was so amazing that she would take the time to send us a video message and it is really, really touching.

“It seems ironic to think that a mundane event such as riding home from work would end in the life-changing moment of being diagnosed with an incurable brain tumour but that’s exactly what happened to me. Stranger still that the crash injuries were more painful than the neurosurgery I underwent several months later.

“At first, it wasn’t clear if the crash had caused the seizure or whether the seizure had caused the crash which sent me hurtling into a stone wall in June 2014. I had a CT scan and then an MRI which revealed the tumour had probably been there for 10 to 15 years. I have already out-lived the average prognosis for my tumour type. In a way that’s good news; the worst part of all of this is the uncertainty and fear that today could be the day the tumour kicks in again. I’m 33 and, while it is hard not knowing what the future will bring, I try to enjoy what we have now rather than dwelling too much on what might happen.”

Among celebrity supporters of this year’s campaign is the businesswoman, model, actress and mum Caprice Bourret who underwent surgery to remove a low-grade brain tumour which was diagnosed a year ago and continues to be monitored by her medical team.

Caprice said: “I have been so touched by Graham’s story. It’s just amazing that brain tumours affect so many people. This devastating disease is indiscriminate and can affect anyone at any age.

“I’m proud to be working with Graham and his family and so many others to support Wear A Hat Day. I want everyone to get involved! It’s such a fun event and anyone can take part. Inspired by Graham, let’s all put our hats on and do something positive to support the fantastic research going on right now. I’m determined to try to make a difference for the 16,000 people diagnosed with a brain tumour each year.”