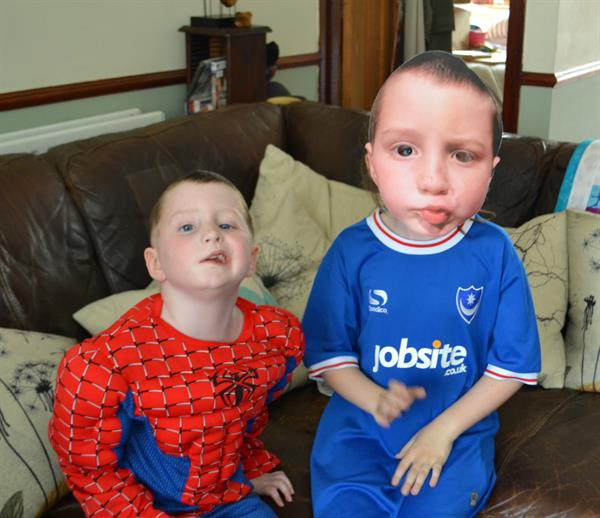 Superhero Harry St Ledger is back at school after six weeks of gruelling treatment for an incurable brain tumour.

The six-year-old, who has inspired a fundraising appeal to fund research helping to find a cure for the disease and campaigning for greater national investment into this area of research, was welcomed back by classmates at Castle Primary School in Portchester, Hampshire, who held a superhero-themed event in his honour on Friday 25th May.

Harry, aged six, was dressed as Spider-Man while his sister Emonie, aged eight and also a pupil at the school, decided to dress as her real-life hero – her brother Harry. The little boy endured his radiotherapy with the help of the superpowers of his favourite comic character whose striking features were painted onto the mesh-mask which Harry wore to ensure the treatment could be delivered with pinpoint accuracy. Each day for 30 days, the mask was bolted across his head, face, and shoulders during treatment.

Staff and pupils were raising money for the newly-launched Harry’s Appeal for Brain Tumour Research. Launched by his parents Ciaran St Ledger and Fiona Lear, the appeal has a target of £50,000 and is highlighting the fact that brain tumours kill more children and adults under the age of 40 than any other cancer yet just 1% of the national spend on cancer research has been allocated to this devastating disease. Brain Tumour Research funds a network of Centres of Excellence, including one at the University of Portsmouth, where scientists are focused on improving treatment options and, ultimately, finding a cure.

Just two months ago Harry, who has autistic spectrum disorder (ASD), was diagnosed with a very rare type of tumour similar to a diffuse intrinsic pontine glioma (DIPG), which has an unbearably stark prognosis. Originally treated at Queen Alexandra Hospital in Cosham and then at Southampton General Hospital, he then underwent six weeks of radiotherapy at University College, London. Just two weeks ago he was readmitted to hospital locally because of swelling on his brain which is thought to have been caused by the treatment.

His father Cairan, who runs HSL Outdoor Cleaning, said: “We continue to live in a nightmare scenario, not knowing what the future will bring. We do know that Harry’s tumour is incurable and the prognosis is extremely bleak. His first MRI after radiotherapy was inconclusive and we are now waiting for another to see if the treatment has had any effect on the tumour.

“We remain angry at the lack of treatment options and appalled at the historic underfunding of research into brain tumours and have launched our appeal in Harry’s name so that other families don’t have to go through the same painful experience as we have and continue to go through. It would be a great achievement for Harry to make a difference.”

DIPG is a specific type of brainstem glioma which usually occurs in children between five and seven, it makes up 15% of all brain tumours in young children. The cells infiltrate the surrounding nerves and are very difficult to remove surgically therefore the treatment that is available is limited. The standard treatment is radiotherapy which can improve symptoms in the short term.

Robin Meltzer, Director of Fundraising for pioneering charity Brain Tumour Research said: “Harry and his family are going through unimaginable distress because of this disease. Brain tumours are indiscriminate; they can affect anyone, at any age. What’s more, they kill more children and adults under the age of 40 than any other cancer – and more children than leukaemia – yet just 1% of the national spend on cancer research has been allocated to this devastating disease.

“We are extremely grateful to Harry, his parents and sister, for all they are doing to help others. We hope his story will bring home to everyone the unique horror of this disease and the fact that brain tumours are indiscriminate and can affected anyone at any age.”

To make a donation to Harry’s Appeal go to https://www.justgiving.com/campaign/Spidermanharry