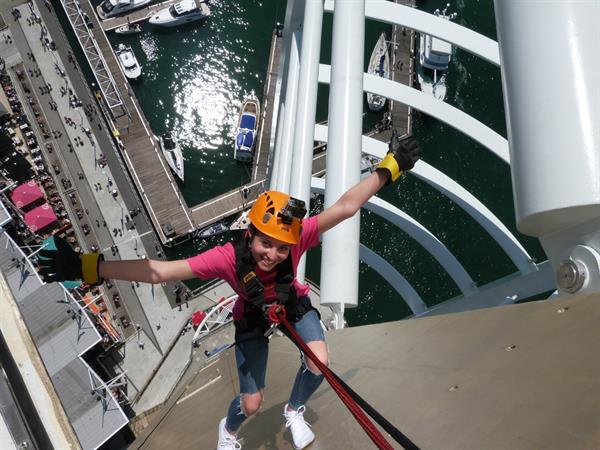 A sixth form student, whose mum is living with a brain tumour, has abseiled the iconic Spinnaker Tower to help build a network of experts in sustainable brain tumour research.

Aimée Humphreys, an 18-year-old from Walsall, took on the challenge in honour of her mum Sue Humphreys, 47, who was diagnosed in 2007. Sue was 36 when she was diagnosed with a low-grade astrocytoma, she underwent surgery but some six years later she needed chemotherapy and another operation. For now, her tumour is stable and her daughter is determined to help others with the disease.

As the highest building in the city of Portsmouth, the Spinnaker Tower offers breath-taking views of the Solent and beyond. Others who joined Aimée on the abseil had also been affected by brain tumours in some way, with many participating in memory of a family member or friend taken by the disease.

Aimée said: “I was really excited to abseil the Spinnaker Tower and it was a privilege to help fund vital research into brain tumours. Though I’m not scared of heights, the adrenaline kicked in on the day, which was both exciting and nerve-wracking. It was such a proud moment for me to complete the challenge.”

Raising over £500 for the pioneering charity Brain Tumour Research, Aimée stepped out of her comfort zone to take on the abseil, supported by members of her family.

Aimée said: “I’m sure mum thinks I was crazy for taking on the challenge, but I made so many great memories and the day was a great success. I hope my efforts will help raise awareness of this awful disease and draw attention to the underfunding of research which has gone on for far too long.”

Tim Green, Community Fundraising Manager at Brain Tumour Research, said: “We really appreciate Aimée’s support and congratulate her on completing her challenge. The money raised from the abseil will help to fund the work at our four Centres of Excellence, including our flagship centre at the University of Portsmouth, where world-leading research into the causes of brain tumours and improving treatments is taking place.

“For too long, brain tumours have been a neglected cancer and stories like Sue’s remind us all that we cannot allow this desperate situation to continue. Sadly, less than 20% of those diagnosed with a brain tumour survive beyond five years compared with an average of 50% across all cancers.”