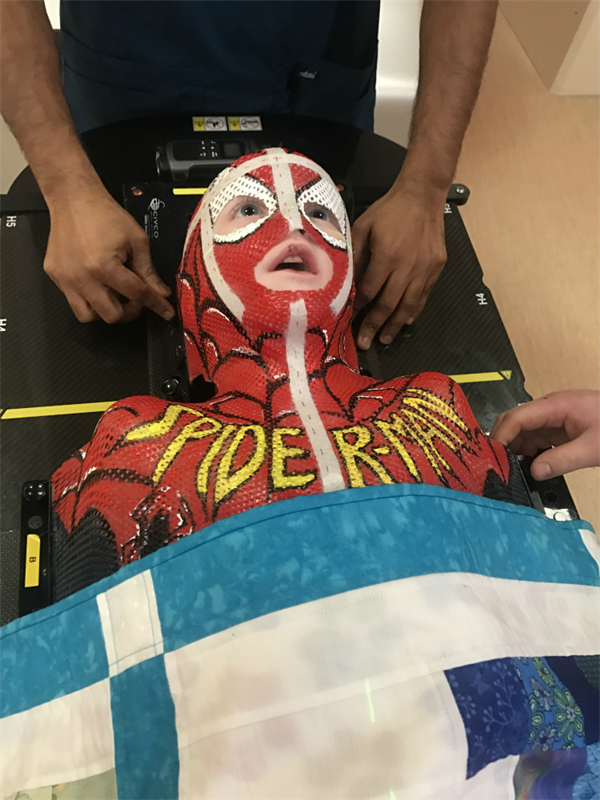 A six-year-old boy diagnosed with a potentially lethal brain tumour is undergoing treatment dressed as Spider-Man, his favourite superhero.

Harry St Ledger has a very rare type of tumour similar to a diffuse intrinsic pontine glioma (DIPG) which has an unbearably stark prognosis and very limited treatment options.

The little boy, from Portchester, has had a radiotherapy mask decorated with the features of Spider-Man and will wear it as his treatment gets underway at University College Hospital, London, today (Wednesday 14th March). Harry and his mum Fiona Lear, 46, will stay in London while he has treatment five days a week for six weeks.

Fiona said: “This may well be the only treatment option open for us and we know that not all children respond. After that the pathway is, sadly, one of rapid deterioration and the average survival time after diagnosis is just nine to 12 months. At this stage we cannot begin to think what may lie ahead if this doesn’t work.”

Harry and his businessman dad Cairan St Ledger, 31, who runs HSL Outdoor Cleaning, are avid Pompey fans and season ticket holders. They were at Fratton Park at the weekend and the family has had “wonderful” support from the club with a home visit from Harry’s favourite players Conor Chaplin and Kal Naismith.

The little boy who, along with sister Emonie, eight, is a pupil at Castle Primary School, was diagnosed last week after being struck down by an ear infection early in the New Year. An MRI scan prior to what should have been a straightforward procedure to fit a grommet in his ear revealed an anomaly in his brain. Harry – know to his family as Harryboy – was originally treated at Queen Alexandra Hospital at Cosham and then at Southampton General Hospital. But his radiotherapy will have to take place in London and the family believes this is because of a shortage or radiographers locally. Harry has autistic spectrum disorder (ASD) and finds it hard to communicate with others and his family face the additional agony that this may complicate his treatment, particularly as he will be away from his familiar home environment.

Fiona said: “I am shocked to learn that brain tumours are the biggest cancer killer of children and adults under the age of 40, yet so many people still think it is leukaemia which is killing more of our precious children than any other form of this hideous disease. I am angry to think that Harry will have to live away from the security and comfort of his own home during treatment as being able to sleep in his own bed and have his own things around him every night would be such a comfort. I am frightened to think of what lies ahead, of what affect the radiotherapy will have on him, of how he will feel dreadfully sick yet extremely hungry due to the steroids which he must take to control the swelling in his brain.”

Harry’s family are working with the national charity Brain Tumour Research which funds a network of Centres of Excellence, including its flagship at the University of Portsmouth, where scientists are focused on improving treatment options and, ultimately, finding a cure for brain tumours.

The charity’s Research Manager Katie Sheen said: “DIPG is a specific type of brainstem glioma which usually occurs in children between five and seven, it makes up 15% of all brain tumours in young children. The cells infiltrate the surrounding nerves and are very difficult to remove surgically therefore the treatment that is available is limited. The standard treatment is radiotherapy which can improve symptoms in the short term.”

Brain tumours are indiscriminate; they can affect anyone, at any age. What’s more, they kill more children and adults under the age of 40 than any other cancer, yet just 1% of the national spend on cancer research has been allocated to this devastating disease. March is National Brain Tumour Awareness Month culminates in Wear A Hat Day on Thursday 29th when individuals, families and businesses across the UK will help raise funds to fight this dreadful disease.