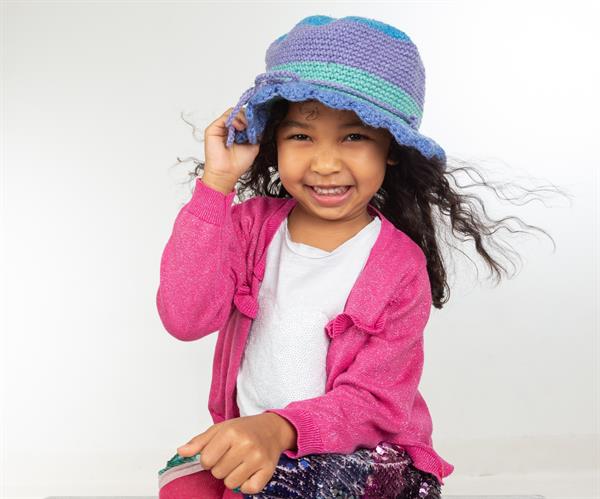 A young girl whose dad lost a close friend to a brain tumour is starring in a marketing campaign which will raise funds to help find a cure for the disease.

Myla Hall is featuring in this year’s national Wear A Hat Day campaign by the Brain Tumour Research charity in memory of her dad’s close friend, Steve Lloyd. The four-year-old from Southgate is among a handful of children who were invited to take part and their images will be seen across the country as the campaign is launched ready for Brain Tumour Awareness month in March. Like Myla, all the children have either been bereaved by a brain tumour, are living with a brain tumour or have a close family member who has been diagnosed.

The kids, aged up to 13, are donning their best headwear from beanies to cowboy hats, trilbies to Panamas, baseball caps to novelty headpieces, and are asking others to join them for Wear A Hat Day 2019, the UK’s premier brain tumour awareness event. This year, it takes place on Friday 29 March and is expected to smash all records as it marks its 10th year.

Myla’s dad Leon lost close friend and colleague Steve in September 2015. The two met at Transport for London and worked together following their apprenticeships in the early 90’s but their friendship was cut short following Steve’s diagnosis with a glioblastoma multiforme (GBM) in 2008. The dad-of-two outlived his prognosis but the tumour was highly aggressive and inoperable, and Steve died aged 40 leaving his wife Angela and daughters Bethany, 12, and Chloe, 10.

Leon, aged 46, said: “Steve’s diagnosis and death were a terrible blow to all who knew him and myself and other colleagues have been supporting Brain Tumour Research ever since. It’s an honour to now have Myla starring in the campaign and she said she is so excited to have her photos taken for Uncle Steve.

“Having lost two close friends to brain tumours I hope by sharing our experience of the disease that we can inspire people to support Wear A Hat Day. It’s an easy way to make a difference and every person that joins in will bring us closer to a cure.”

Sue Farrington Smith, Chief Executive of Brain Tumour Research, said: “We are extremely grateful to Myla for helping us to launch Wear A Hat Day 2019. I know that people will be both distressed and inspired to hear the stories of all of these families who, like my own, know the pain of a brain tumour diagnosis.

Wear A Hat Day has raised over a million pounds since it was launched by Brain Tumour Research 10 years ago and is the culmination of Brain Tumour Awareness Month in March. The big day will see schools, workplaces, families and individuals across the UK fundraising and taking part in fun events to raise awareness of brain tumours and help fund life-saving research.