Son lost to brain tumour is remembered at research centre 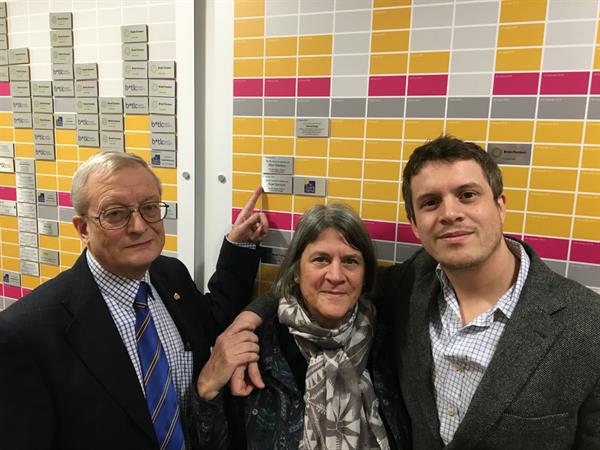 A father who lost his son to a brain tumour is helping to fund scientific research into finding a cure for the disease.

John Stanton, 70, from Berkeley in Gloucestershire, who was president of The Rotary Club of Cotswold Tyndale club for 2016/17, chose the charity Brain Tumour Research as the club’s Charity of the Year, after losing his son Alan to an aggressive brain tumour in 2015. Alan was just 30 years old when he died and left behind his wife Lucy and five-month-old son Joshua.

Through hosting a number of fundraising events, which included a Valentine’s Day dance, frog racing and a charity golf match the group raised over £6,000 to go towards research into the disease.

John was joined by his wife, Jean, and Alan’s twin brother Charles to place two tiles on the Wall of Hope at the Brain Tumour Research Centre of Excellence at Queen Mary University of London. The centre, one of four receiving funding from the chairity, is focused on research to improve treatments for patients with brain tumours and, ultimately, finding a cure. Each tile laid on the wall represents the £2,740 it costs to fund a day of research.

Led by Prof Silvia Marino, in collaboration with University College London, the team at the centre are studying glioblastoma tumours – one of the most aggressive and deadly types of brain cancer and the tumour that Alan died from.

John said: “Alan was a wonderful son, father and friend. Seeing his name on the Wall of Hope was a special moment for us as a family. Being at the research centre and seeing what they are doing here, really draws attention to the cost of research and work that needs to be conducted to find a cure for brain tumours.”

According to Brain Tumour Research, less than 20% of those diagnosed with a brain tumour survive beyond five years, compared with an average of 50% across all cancers. Brain tumours also kill more men under 45 than prostate cancer.

Carol Robertson, Community Fundraising Manager (South) for Brain Tumour Research, said: “We are really grateful to John and the club for raising vital funds to support important research into a disease which affects so many people and their families each year. Stories like Alan’s remind us all that we cannot allow this desperate situation to continue.”