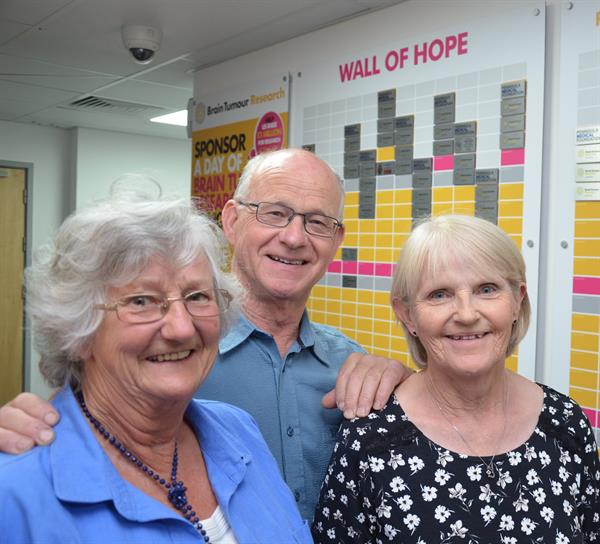 Team members of Astro Brain Tumour Fund, who have all had loved ones affected by brain tumours and raised almost £1 million towards research into the disease, were invited by the Brain Tumour Research charity to visit its Research Centre of Excellence at the University of Plymouth.

Among the Astro Brain Tumour Fund team at Plymouth were Secretary, Christine Forecast, who lives in Sedgeford, Norfolk. It was the diagnosis of her son-in-law, Paul Chamberlain, with a low-grade astrocytoma brain tumour in 2000, aged 30, when her daughter Emma was three months pregnant with their second child, which led to the founding of Astro Brain Tumour Fund, a member charity of Brain Tumour Research.

Sadly Paul’s brain tumour became aggressive and he passed away just five years later, having suffered from a terrible combination of personality changes and physical disabilities due to the progressive nature of this devastating form of cancer.

Astro Brian Tumour Fund raises funds solely for research into adult and paediatric low-grade brain tumours, making it unique in the UK. It also offers support to people around the globe whose lives are touched by this challenging type of brain tumour.

On Wednesday 13th June, Christine, along with five other Trustees, including Treasurer Mary Burton, of Holme-next-the-Sea, who lost her niece to a brain tumour aged just 29, and Mary’s husband, Robbie, whose nephew died from a brain tumour aged 28, were invited by the charity to visit the research centre in Plymouth to see how all money raised contributes towards this vital research. The Astro Brain Tumour Fund team also had the opportunity to place four tiles on the Wall of Hope at the research centre.

The centre, one of four receiving funding from Brain Tumour Research, is focused on research to improve treatments for patients with brain tumours and, ultimately, finding a cure. Each tile laid on the wall represents the £2,740 it costs to fund a day of research.

Led by Prof. Oliver Hanemann, the team at the centre specialises in research into low-grade brain tumours. These tumours are usually slow-growing, but progress to become malignant; there is no cure, and nobody can tell you whether this process will take five, 10 or 20 years.

Mary commented: “Today has been a fantastic opportunity for the Astro Brain Tumour Fund team to see how we are making a difference to researchers.”

Christine added: “The tiles we placed symbolise not only the money we’ve raised for research into low-grade brain tumours, but also commemorate everyone we have lost, and honour everyone living with the serious long-lasting effects caused by this disease and its treatment.”

Brain tumours are indiscriminate; they can affect anyone at any age, yet just 1% of the national spend on cancer research has been allocated to this devastating disease.

Sue Farrington Smith, Chief Executive of the Brain Tumour Research charity, said: “We are very grateful to Christine, Mary and Robbie and everyone at Astro Brain Tumour Fund for supporting research into low-grade brain tumours at our Centre of Excellence. We are really pleased they have been to see the research taking place at the University of Plymouth, and also place tiles on the Wall of Hope. Stories like Paul’s remind us all that we cannot allow this desperate situation to continue.”

To make a donation to Astro Brain Tumour Fund please go to www.astrofund.org.uk