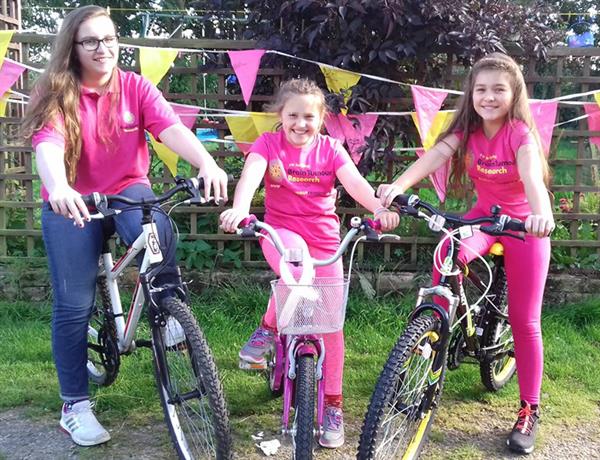 Three sisters who lost their uncle to a brain tumour are setting off on a sponsored cycle ride to raise money for research into the disease.

Farmer and keen hunting man Adam Forster passed away at the age of 42, less than a year after being diagnosed with an aggressive glioblastoma multiforme (GBM) brain tumour.

Now his nieces are saddling up to cycle 16 miles along the disused railway line from Stanhope to Consett in his memory. The event is being organised by Gracie Robson, aged nine, and she will be joined by sisters Ellie, 12, and Lauren, 14. Also pedalling alongside them will be their mum Kerry and grandfather Terry Forster.

Adam, who farmed at Camperdown, Shotley Bridge, and followed the Braes of Derwent and Tynedale and Haydon hunts, died in May 2014. He adored his nieces and Gracie is hoping that her event will help to raise awareness of the disease which kills more children and adults under the age of 40 than any other cancer yet has been allocated just 1% of the national spend on cancer research.

Proud mum Kerry, Show Secretary for the Northumberland County Show, said: “Somehow Adam found the strength to cope. He was a trooper and his concern was always for others.

“His tumour was a grade four glioblastoma multiforme (GBM), the worst it could possibly be. I don't think Adam really knew how high-grade his tumour was, but he was aware that it was inoperable and the prognosis was bleak; he had probably just two years to live, five years at best. Radiotherapy and chemotherapy began and that took us up to March and he lived for just two months after that.

“We feel very strongly about the dreadful underfunding for research into brain tumours and are sharing Adam’s story in the hope it will raise awareness. The girls’ schools have taken part in the Brain Tumour Research’s annual fundraiser Wear A Hat Day and we have been doing other fundraising for the charity in memory of Adam.

“Fundraising for Adam has definitely helped the girls to cope with their loss and I am proud that they will be doing this ride in memory of their uncle on 27th August. Adam was a very private man in his illness but he would be proud to think that by talking about what happened to him we are making a difference for other people.”

To make a donation to Brain Tumour Research in memory of Adam go to www.justgiving.com/16milegracie