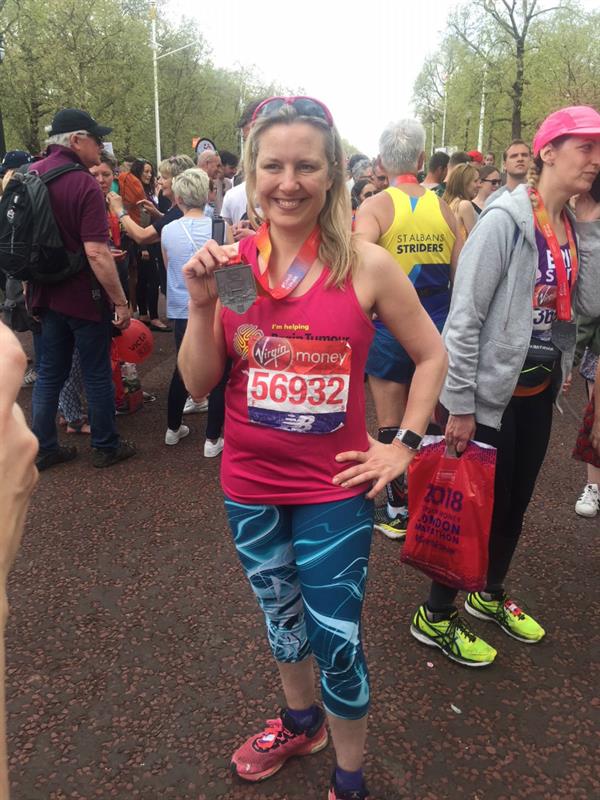 A woman from Henley has completed the London Marathon in a time of 5.41 to raise funds to help scientists find a cure for the disease which her sister was diagnosed with just over two years ago.

Vanessa Fewell, 42, from Chiddingstone Causeway, near Edenbridge in Kent, was told she had an astrocytoma brain tumour in February 2016, when her children Ella, Harry and Sophia were all under the age of 12. She underwent surgery and then had to endure gruelling radiotherapy and chemotherapy treatment which only finished just before Christmas 2017.

Vanessa’s sister Annabel Gallifant, 41, who works in Marlow for the pharmaceutical company Allergan as Vice President of Marketing (Eye Care), has raised more than £4,400 for the pioneering charity Brain Tumour Research which funds a network of Centres of Excellence where scientists are focused on improving outcomes for patients and, ultimately, finding a cure.

Annabel said: “Vanessa has been such an inspiration. It has been an incredibly difficult time for her and her family, particularly as they live in the sticks and, having had brain surgery, she has had to give up her driving licence. It has had a massive impact on family life and has made it much more challenging getting her to hospital appointments in London. Despite it all, Vanessa remains determined to get on with her life, despite an uncertain future.”

Vanessa commented: “Anna is amazing. She has a demanding job and two young children and yet she has still found the time and energy to fit in all the training and fundraising.

“We have received the most phenomenal support from our friends and family. I dearly hope her marathon effort can take us one step closer to the ultimate goal of finding a cure.  Thank you to everyone for helping us raise awareness and vital funds for such an underfunded and cruel disease.”

Annabel was among 40,000 runners taking part in the event which was started by The Queen from the grounds of Windsor Castle and relayed to big screens at the start line in Blackheath. It was the 38th London Marathon to take place since the first on 29th March 1981.

Of the experience itself, Annabel said: “It was very hot – I have never run marathons or half-marathons in temperatures like that. It was incredible, however, to see so many other runners with causes very close to their hearts like me and it gave me such a huge boost to see Vanessa at mile 23.”

Vanessa added: “I am so pleased and proud of my sister and really appreciate the incredible amount she has raised for Brain Tumour Research, despite losing toenails and incurring massive blisters in the process!”

Michael Thelwall, Head of Community Fundraising for Brain Tumour Research, said: “Annabel’s determination and commitment are fantastic and I hope she will provide inspiration to others whose lives have been affected by a brain tumour.

“Brain tumours kill more children and adults under the age of 40 than any other cancer – yet just 1% of the national spend on cancer research has been allocated to this devastating disease.

“For too long, brain tumours have been a neglected cancer. Experiences like Vanessa’s remind us all that we cannot allow this desperate situation to continue. We are extremely grateful to Annabel and offer our congratulations to everyone who took part in this year’s event to raise money for charity.”