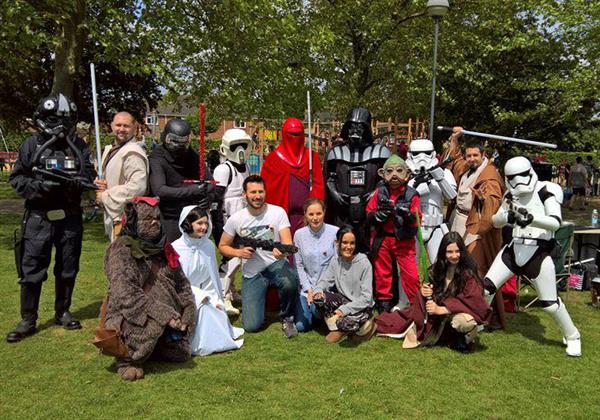 A little boy who passed away five months after being diagnosed with a brain tumour will be remembered this Sunday 20th May with a Jedi Walk in Eaton Park, Norwich.

Finnbar Cork was a happy, active five-year-old boy and a pupil at Hethersett Woodside Nursery & Primary School, enjoying life to the full, when he started experiencing dizziness and later staggering when walking. After several trips to the GP, his family eventually got him referred to the Norfolk and Norwich University Hospital. Tragically, his diagnosis with a low-grade astrocytoma was changed two months later to a more aggressive type of brain tumour. His parents, Tristan and Claire, were given the devastating news that there was nothing that could be done to save their little son.

Tristan, a paramedic, and Claire, a nurse, who live in Hethersett, set up new charity Finnbars Force in their son’s memory and became a Member Charity of pioneering national charity Brain Tumour Research. They are raising funds to help find a cure for this devastating disease which kills more children and adults under the age of 40 than any other cancer and are inviting families to come along and join in the fun this weekend.

Tristan explained: “Just a year before Finnbar died, he had become a huge Star Wars fan and had watched the films loads of times. A number of local schools celebrate May 4th (May the Force be with You) in his memory by asking the children to dress up as Star Wars characters. The celebrations at Heatherset Woodside School also extend to a Star Wars-themed menu at lunchtime, a disco after school and the staff dressing up too!

“We are also organising games and there will be a cake stall so that everyone can refuel after all the activity.

“Come along to Eaton Park anytime between 9.30am and 3.30 pm on Sunday and you will find us opposite the children’s play area. The cost to join in is £3 per child, which will include a medal, for finishing or £5 for two children and allow roughly an hour to complete.

“Last year more than 225 children took part, raising more than £1,500 for Finnbar’s Force which raises funds for research into childhood brain cancer and seeks to raise awareness of the disease and its debilitating effects and to campaign for improvements in the current standard of care and support available, as well as for more research.

“We hope to double that figure this year. Just 1% of the national spend on cancer research has been allocated to brain tumours and we desperately want to help find more effective treatments and ultimately a cure, bringing hope to future families affected by the disease.”

If you are unable to join in the Jedi Walk but would like to help with Finnbar’s Force’s fundraising please go to www.finnbarsforce.co.uk/donate

For further information, please contact:
Liz Fussey at Brain Tumour Research on 07811 068357 or liz@braintumourresearch.org or Tristan Cork on 07508 548517 or finnbarsforce@gmail.com