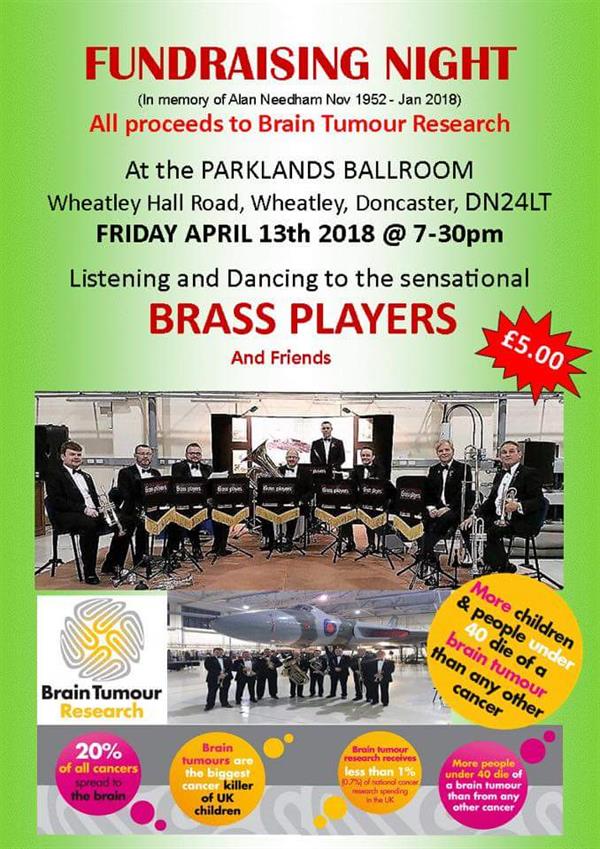 A man who joined his first brass band at the age of eight and went onto become a highly-respected conductor and musical director of brass bands across Yorkshire and the Midlands, until his death from a brain tumour in January, will be remembered at an evening event next month in Doncaster.

On 13th April there will be an evening of music, dancing, fun and entertainment held at the Parklands Ballroom in Wheatley Hall Road, Wheatley, Doncaster, starting at 7.30pm. The Brass Players, a group of professionals with over 250 years experience between them, will be playing a repertoire ranging from classical to pop and rock to baroque with funds raised going to the national charity Brain Tumour Research in memory of Alan Needham.

Also appearing will be Celtic Irish dancers, made up primarily of youngsters from eight-years-of-age to mid-teens, who will perform Riverdance. The Brass Players will also play a dance session of foxtrot and quickstep, not normally associated with brass bands.

Tickets, priced at £5.00 per head, will be available on the door.

Alan Needham, who moved from Doncaster to Scunthorpe for the last few years of his life, was diagnosed with an aggressive and incurable glioblastoma multiforme brain tumour in January 2014, just a year after getting together with his partner and soul-mate, Sarah Schofield. He was told he had just six to 12 months to live. Alan underwent a wide-awake craniotomy to help minimise the long-term effects of surgery and give him a few extra months, as well as chemotherapy and radiotherapy.

In 2017, Alan was told that his tumour had reoccurred and that he needed further surgery. Sadly he suffered a stroke during the operation, which affected his left-side. Later in the year Alan developed sepsis and was admitted into Castlethorpe nursing home as he needed 24-hour care.

His brother, Ray, commented: “Not being able to get out either with Sarah and his dog, Duke, or into his garden was too much for Alan and the fight seemed to go out of him. He was very ill and had lost coherence and memory. We were constantly thinking we were about to lose him.

“It was really hard to see Alan like this – he had always been such an entertaining person, lighting up a room just by walking into it.”

Alan passed away on 2nd January, but not before many of the friends he had made during his 57-year association with brass bands had come to pay their respects either on his 65th birthday back in November or at Christmas when band members gathered outside his window to play carols.

After being diagnosed with a brain tumour, Alan dedicated himself to raising awareness of the disease and was also able to donate more than £11,500 to national charity Brain Tumour Research, mainly through fundraising events connected with the brass band community. Now Ray, who played with and banded together with Alan for 55 years, along with other family members, including Alan’s sons Darren and Andrew, are committed to continuing Alan’s legacy.

Carol Robertson, Head of Community Fundraising (North) at Brain Tumour Research said: “Brain tumours are indiscriminate; they can affect anyone at any age. What’s more, they kill more children and adults under the age of 40 than any other cancer... yet just 1% of the national spend on cancer research has been allocated to this devastating disease.

“We are hugely grateful to Alan’s family and especially Ray for continuing to fundraise for Brain Tumour Research in Alan’s memory. This will help us continue to fund research within a network of world-class Centres of Excellence the charity has established in the UK.

To donate in memory of Alan go to www.justgiving.com/fundraising/Alan-Needham