Sam takes on marathon challenge in memory of colleague 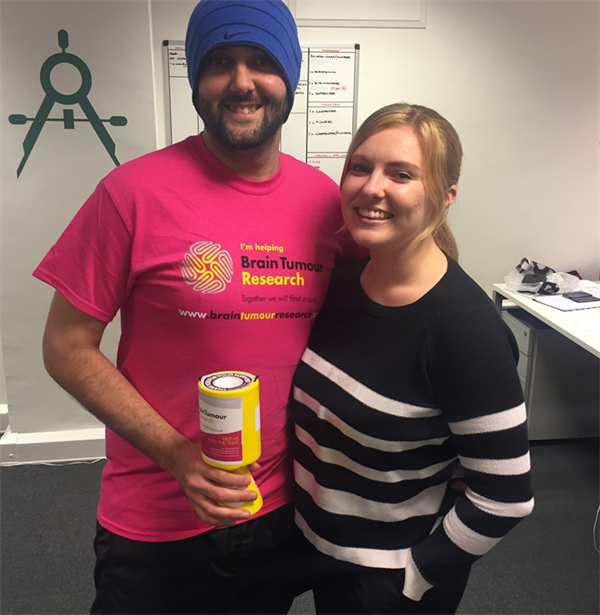 A man who lost a work colleague to a brain tumour is taking on the challenge of running the London Marathon to raise funds for research into the disease.

Sam Wheeler, who lives in Portsmouth and works as a recruitment consultant at Workshop Recruitment in Havant Road, has already raised more than £350 and is hoping to reach a target of £3,500 for the pioneering charity Brain Tumour Research which funds a network of Centres of Excellence, the first of which was established at the University of Portsmouth where scientists are focused on improving outcomes for patients and, ultimately, finding a cure.

Sam’s colleague and friend, Joan Cook, passed away in October 2017 at the age of 64, after being diagnosed only four months earlier. Joan lived in Portsmouth with her elderly mother and she had become good friends with all the staff at Workshop Recruitment during the time that she worked with them. The speed at which Joan became ill was a huge shock to everyone in the tight-knit team. Joan had liver cancer which rapidly spread to her brain.

Sam, 34, said: “Joan was a very positive and focused lady, and her generous and bubbly personality meant she got on extremely well with everyone. Even when she became ill, she was determined to live life as normally as she could, despite undergoing radiotherapy treatment. She never gave up and was working until the week before she died.”

Outside of work, Joan and Sam shared a love of baking, often exchanging recipes and tips. Sam is due to marry his girlfriend Laura Wood, who also works at Workshop Recruitment, in March. He said: “Joan made great cakes and had offered to make our wedding cake for us which we were really excited about. However, this excitement turned to unbearable sadness when Joan realised she wasn’t going to be around for our wedding. I’ll never forget the day she told me and because she knew how much I also enjoy cooking she insisted on giving me various ingredients and items from her store cupboard before she died. She was incredibly brave right to the end, and a very special person.

“Joan’s bravery, fight and never give up attitude has inspired me to enter the London Marathon in her memory to support Brain Tumour Research. I want to do all I can to raise awareness and urge people to donate to this great cause. One of our directors, Peter Hunt, also lost his mother to a brain tumour four years ago, so this a cause which is very dear to all our hearts. Very little is known about the causes of brain tumours so it’s vital that we raise as much money as possible to fund further research and hopefully bring an end to this awful disease.”

Sam will be pounding the streets of the capital on Sunday 22nd April as he takes part in the marathon, which is the world’s most famous running event.

“For too long, brain tumours have been a neglected cancer. Experiences like this remind us all that we cannot allow this desperate situation to continue. We are extremely grateful to Sam for his support and are appealing for runners who have a ballot place for the marathon to join him on Team Brain Tumour Research by nominating us as their chosen charity for 2018. Together we will find a cure.”