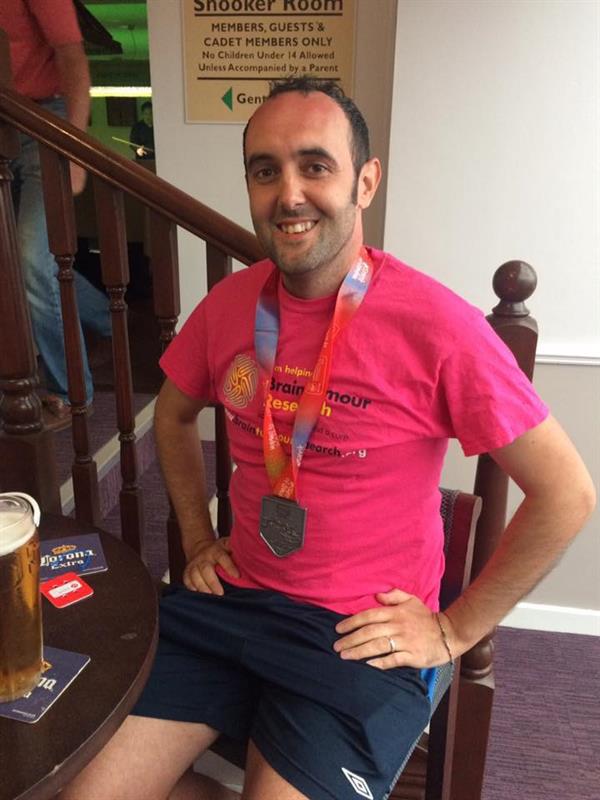 A man who lost a work colleague to a brain tumour has completed the London Marathon to raise funds for research into the disease.

Joining tens of thousands of runners on Sunday 22nd April, Sam Wheeler, who lives in Portsmouth and works as a recruitment consultant at Workshop Recruitment in Havant Road, was inspired to take part in the world’s biggest running event for the charity Brain Tumour Research after his colleague and friend, Joan Cook, passed away in October 2017 at the age of 64, after being diagnosed only four months earlier.

Joan lived in Portsmouth with her elderly mother and she had become good friends with all the staff at Workshop Recruitment during the time that she worked with them. The speed at which Joan became ill was a huge shock to everyone in the tight-knit team. Joan had liver cancer which rapidly spread to her brain.

"Joan was a very positive and focused lady, and her generous and bubbly personality meant she got on extremely well with everyone. Even when she became ill, she was determined to live life as normally as she could, despite undergoing radiotherapy treatment. She never gave up and was working until the week before she died. I just kept thinking of her and all the thousands of other people that are diagnosed though little is still known about the disease. Just knowing I’ve raised over £1,6000 so far for Brain Tumour Research is such a great feeling.”

Sam was one of 40,000 runners taking part in the event which was started by The Queen from the grounds of Windsor Castle. It was the 38th London Marathon to take place since the first on 29th March 1981.

The money Sam has raised will go towards the pioneering charity Brain Tumour Research which funds a network of dedicated Centres of Excellence where scientists are focused on improving outcomes for patients and, ultimately, finding a cure.

Tim Green, Community Fundraising Manager for Brain Tumour Research, said: “Brain tumours kill more children and adults under the age of 40 than any other cancer -  and more women under 35 than breast cancer, yet just 1% of the national spend on cancer research has been allocated to this devastating disease.

“For too long, brain tumours have been a neglected cancer. Stories like Joan’s remind us all that we cannot allow this desperate situation to continue. We are extremely grateful for Sam’s support and offer our congratulations to everyone who took part in this year’s event to raise money for charity.”

To make a donation to Brain Tumour Research via Sam’s fundraising page go to  https://uk.virginmoneygiving.com/SamWheelerRunningForJoan