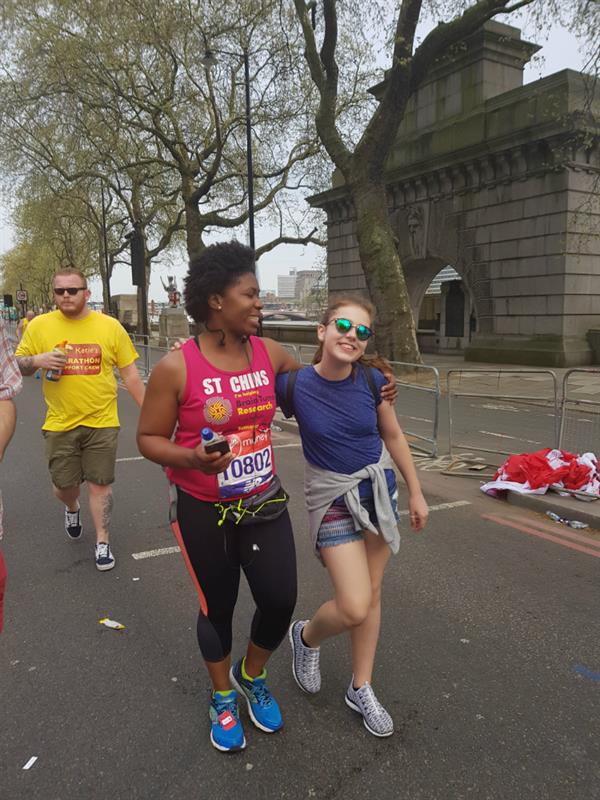 A mum of two from Rochester has completed the London Marathon in an effort to raise awareness and funds for research into brain tumours following the diagnosis of her close friend’s daughter.

Joining tens of thousands of runners, Esther Moore, aged 40, was inspired to take part in the world’s biggest running event after Poppy Eden, from Chatham, was diagnosed with a pilocytic astrocytoma at the age of 11. Poppy, the daughter of Esther’s friend, was eventually diagnosed with the disease following 22 doctor’s appointments.

Poppy started suffering from sickness and headaches in 2013 however it wasn’t until three years later that an MRI scan identified a low-grade non-cancerous brain tumour as the cause. Doctors operated immediately in January 2016 and were able to remove 60 per cent of the tumour. Poppy, who is now 13, has since recovered from surgery and returned to school at Fort Pitt, but still has regular scans to monitor the tumour.

Esther said: “Completing the London Marathon is such a personal achievement for me. It was a huge challenge but I’ve done it! I’m hoping to raise £1,200 for Brain Tumour Research and contribute towards research so that one day a cure is found for this dreadful disease.

“I couldn’t have done it without the support of Poppy and her mum Karen. It was Poppy who inspired me to fundraise and I’m just so pleased that she’s beaten the tumour and is able to be here today to watch me cross the finish line.”

Poppy, who was at the marathon to cheer Esther on, said: “It’s so nice that Esther has chosen to raise money for Brain Tumour Research. She’s a great friend to our family and we’re all really happy that she’s taken on the London Marathon for a charity we care so much about.”

Esther was one of 40,000 runners taking part in the event which was started by The Queen from the grounds of Windsor Castle. It was the 38th London Marathon to take place since the first on 29th March 1981.

The money Esther has raised will go towards the pioneering charity Brain Tumour Research which funds a network of dedicated Centres of Excellence where scientists are focused on improving outcomes for patients and, ultimately, finding a cure.

Michael Thelwall, Head of Community Fundraising for Brain Tumour Research, said: “Esther’s determination and commitment are fantastic and I hope her story will provide inspiration to others whose lives have been affected by a brain tumour.

“Brain tumours kill more children and adults under the age of 40 than any other cancer – and they kill more children than leukaemia – yet just 1% of the national spend on cancer research has been allocated to this devastating disease.

“For too long, brain tumours have been a neglected cancer. Experiences like Poppy’s remind us all that we cannot allow this desperate situation to continue. We are extremely grateful to Esther and offer our congratulations to everyone who took part in this year’s event to raise money for charity.”