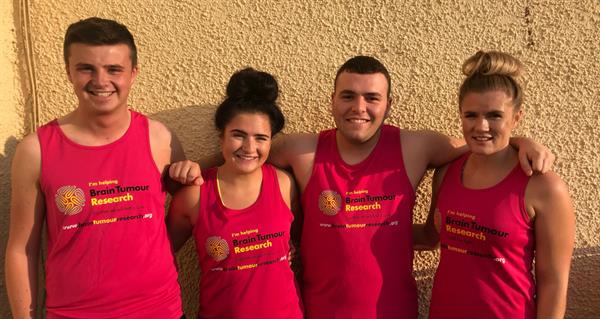 Two brothers whose lives were claimed by brain tumours will be remembered by family members who are running the Great North Run in support of the Brain Tumour Research charity.

Michael and Richard Jeffery will be remembered at the Great North Run by Team Jeffery, which is made up of Michael and Richard’s nephew, Adam Jeffery, nieces Annabelle and Catherine Porter, and family friend Liam Irving. The team are taking part in the world’s biggest half marathon to raise vital funds for the charity which helps fund sustainable research into the indiscriminate and devastating disease.

Richard Jeffery died from a highly aggressive and incurable brain tumour, a glioblastoma multiforme (GBM), in 1991 at the age of 25. His brother, Michael, was then diagnosed with a brain tumour in May 2016, 25 years on from his brother’s death.

Michael, who worked at Sellafield Ltd in Cumbria, suffered from a mini seizure which was suspected to be a stroke. After months of hospital appointments, Michael was diagnosed with an astrocytoma and underwent radiotherapy. The treatment was unsuccessful and Michael deteriorated until his death 18 months later in December 2017.

Annabelle, 26, who also works at Sellafield, said: “Completing the Great North Run is going to be such a special moment for us as a family. We’ve been training for a long time and it will be such an achievement when we cross the finish line together.

“It’s unbelievable that two brothers could both die from this indiscriminate disease, and we want to contribute to research in the hope that no more families have to watch their loved ones suffer like Richard and Michael did. We’ve raised over £2,000 between us and want to keep adding to that over the coming weeks.”

Team Jeffery will be among thousands of runners taking part. This year’s event, which takes place on 9th September, will begin in Newcastle city centre before finishing at the coast in South Shields some 13.1 miles later.

A team of 42 will be taking part and raising money for Brain Tumour Research which funds dedicated UK Centres of Excellence where scientists are focused on improving outcomes for patients and, ultimately, finding a cure.

Andrea Pankiw, Community Fundraising Manager for Brain Tumour Research, said: “Brain tumours kill more children and adults under the age of 40 than any other cancer yet just 1% of the national spend on cancer research has been allocated to this devastating disease.

“Stories like Richard’s and Michael’s remind us that we cannot allow this desperate situation to continue. We are extremely grateful for Team Jeffery’s support and wish them all the best for the event.”