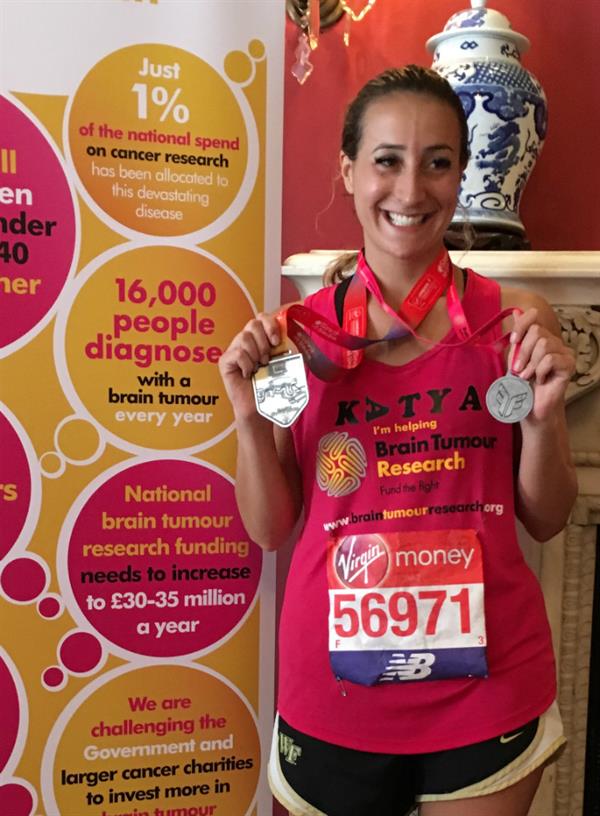 A medical student who lost her father to a brain tumour has raised nearly £2,000 to help scientists find a cure for the disease.

Katya Strage was only four when her father was diagnosed and has now honoured his memory and achieved a long-held ambition by running the London Marathon for charity.

She hopes to achieve a total of £3,500 for the pioneering charity Brain Tumour Research and the money will help scientists find a cure for the disease.

David Strage, from Sevenoaks, Kent, had a grade four anaplastic astrocytoma and was initially told he had just six months to live but, thanks to the tireless efforts of his medical team, he lived for six years.

Katya, aged 26, who is in her third year at Texas A&M College of Medicine in Dallas, said: “I was only little when dad became ill. The type of tumour he had is very rare in adults and he managed to outlive his prognosis largely thanks to the skills and dedication of his medical team.

“I will be forever grateful for everything they did for dad as this gave him six precious years in which I got to know him and those memories have sustained me along the way.

“I feel I owe the memories I have of my father to organisations such as Brain Tumour Research which is working so hard to raise awareness of this disease and the lack of funding for research.”

The money will help scientists working at a network of Brain Tumour Research Centres of Excellence to continue their work to improve patient outcomes and, ultimately, find a cure.

Katya was among 40,000 people who pounded the streets of the capital on Sunday 22nd April 2018 as she took part in the marathon, which is the world’s most famous running event. Her father, who was 36 and with three young children when he was diagnosed, passed away in February 2002 at the age of 42.

“For too long, brain tumours have been a neglected cancer. Experiences like this family’s reminds us all that we cannot allow this desperate situation to continue. We are extremely grateful to Katya for her support and congratulate her on her marathon effort.”