Phoebe and family walk for charity after brain tumour loss 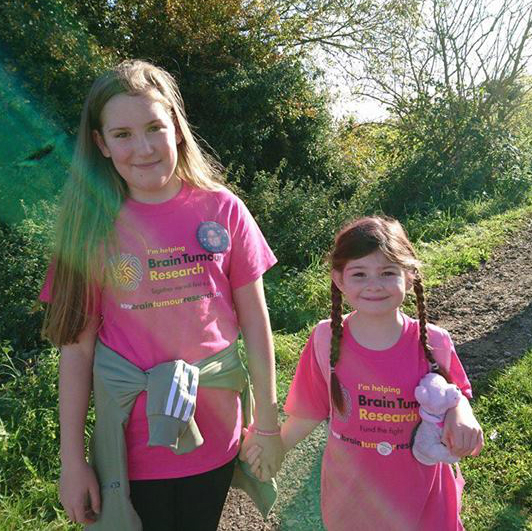 Seven-year-old Phoebe Vines from Tetford has completed a challenge to walk 11 miles for charity in memory of her mum who died of a brain tumour just three months ago.

Phoebe was part of a nine-strong team who took part in the Grand Union Canal Walk for Brain Tumour Research on Saturday (30 September). Together they have raised more than £2,500, almost enough to fund a day of research at one of the charity’s Centres of Excellence where scientists are focused on finding a cure for the disease.

Together with her grandparents Claire and Steve, cousins, friends and other family members, Phoebe set out to walk along the canal from Stoke Hammond in Buckinghamshire into Bedfordshire and back. Initially it was thought she would complete half the route but her energy and enthusiasm and that of her family saw her completing the whole 11 miles.

Grandmother Claire said: “Phoebe’s energy is a great source of strength to us. She decided to walk the whole way saying she was ‘doing it for her mummy’. Our fundraising target is £2,740 to fund a day of research in Becky’s memory and we are so close to achieving that.

“Becky was an inspiration and always so positive and it is such a comfort to see how much of her wonderful personality she has passed on to Phoebe. Although she misses her mummy desperately she is determined to do her bit.”

Becky was diagnosed with an aggressive glioblastoma multiforme (GBM) brain tumour at the age of 23 and given just a year to live. She underwent surgery and years of treatment, losing her fight in June at the age of 31.

This is the sixth year the 11 mile walk along the picturesque canal has been held. This year 88 people and five dogs came together to help raise over £13,000 for the charity, with more donations due to come in over the coming days.

Paula Rastrick, Community Fundraising Manager at Brain Tumour Research, said: “This is always a popular event for us, and it was lovely to see so many old and new faces. Like Phoebe, Claire and her family many of those taking part know only too well the devastation a brain tumour diagnosis causes. There was a strong sense of fellowship and sharing of experiences on the day, which is a very positive thing.”

To make a donation to Brain Tumour Research via Phoebe’s JustGiving page go to https://www.justgiving.com/fundraising/beckysbattlers