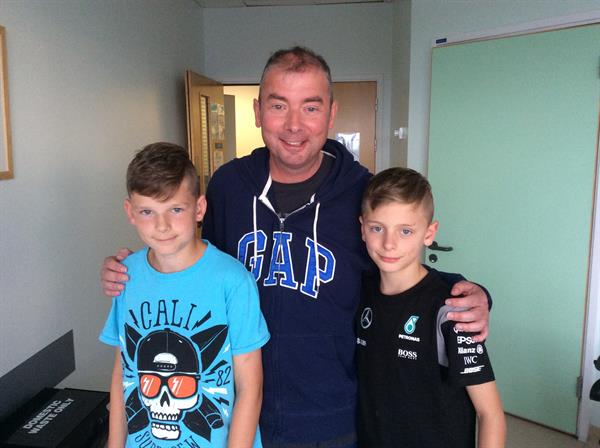 Partners at John Lewis in High Wycombe are clipping in for charity in the national On Yer Bike challenge and fundraising for the Brain Tumour Research charity.

The store has chosen Brain Tumour Research as its charity of the year after losing two partners to brain tumours, including dad-of-two, Andy Graham, 52, on New Year’s Eve 2017, as well as other loved ones of partners. To date it has raised an incredible £5,242 to help find better outcomes for patients and, ultimately, a cure.

Andy, who worked at the High Wycombe store for 29 years and was a camera expert, started having dizzy spells in early 2016, which were put down to an inner ear infection. As the dizziness continued, he went back to the GP and was sent for a routine scan. Andy was diagnosed with a low-grade haemangioblastoma but, despite surgery and treatment, he suffered unimaginable trauma and distress as the tumour continued to grow.

After two bleeds on his brain, Andy was unresponsive in hospital in intensive care. On the advice of his medical team, Andy’s wife Gill took the heart-breaking decision that it was time to let him go.

Since losing her husband and dad to Oliver and Daniel, Gill said: “I’ve been shocked to learn just how many people are affected by brain tumours. The boys and I are trying to do our bit to raise awareness of this sad fact and we hope that one day a cure will put an end to all this suffering.”

To mark On Yer Bike day – Saturday 23 February – partners at the store will be jumping on a static bike and pedalling as many miles as they can throughout the weekend of 23 and 24 February.

Dawn Stokoe, partner & community liaison coordinator at John Lewis, High Wycombe ,said: “Having seen two of our partners succumb to brain tumours, we were all clear we wanted Brain Tumour Research to be our branch charity. So many partners have used their skills, creativity and energy to raise over £5,000 from events such as a chef-at-home silent auction to car washes and raffles and even a sponsored bush tucker trial. This has been a real team effort as we are totally behind Brain Tumour Research’s quest for a cure.”

On Yer Bike has been running since 2012 when it was launched as a local event by brain tumour patient Paul Halfpenny from Derbyshire. Sadly, Paul passed away in 2014 but the event continued and now takes place nationwide. Participants select a sponsorship target, set up a fundraising page and, for the first time, can track their performance and ranking on the national leader board.

Michele Grey, head of corporate fundraising for Brain Tumour Research, said: “We are very grateful to John Lewis and Andy’s family for their support. We hope they will inspire others and many more people will get on their bike this February.

“Brain tumours kill more children and adults under the age of 40 than any other cancer yet, historically, just 1% of the national spend on cancer research has been allocated to this devastating disease, and Brain Tumour Research is proud to be changing this. Together we will find a cure.”

To sign up for On Yer Bike, go to www.onyerbikechallenge.org