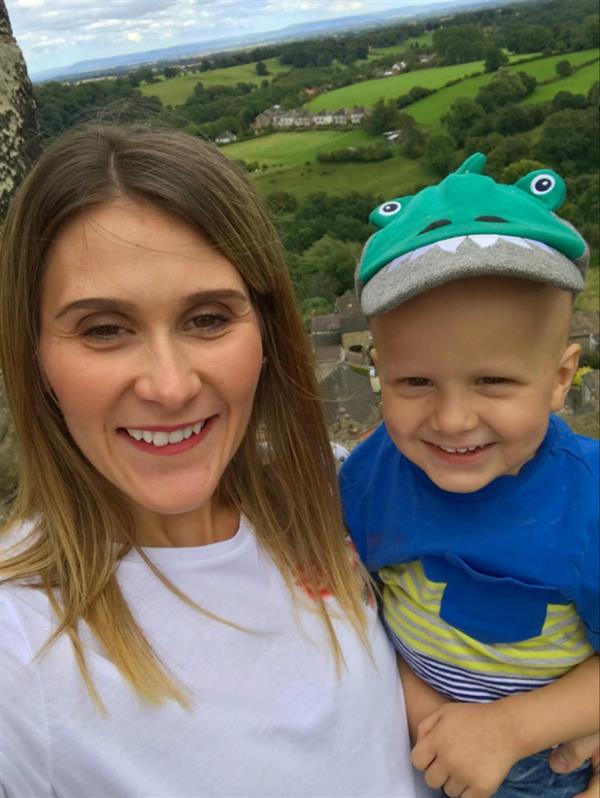 The parents of a two-year-old boy who is living with a high grade brain tumour are taking on the Great North Run to raise funds for research to help find a cure for the disease.

Finlay Niles is currently undergoing chemotherapy after having a choroid plexus carcinoma removed seven months ago.

Anthony, an infantry soldier, and Ellys, a full-time mum and former spa therapist, who have just moved from Arborfield, near Reading, to County Durham to be near family, will be among thousands of runners taking part in the Great North Run, the world’s biggest half marathon. This year’s Great North Run takes place on 10th September, starting in Newcastle and covering a 13.1 mile route.

A 35-strong team will be taking part and raising money for the pioneering charity Brain Tumour Research which funds a network of Centres of Excellence where scientists are focused on improving treatments for patients and finding a cure. Each day of research costs £2,740.

Finlay’s symptoms, which included problems with balance and walking, were initially dismissed by a number of health professionals but he was finally diagnosed in February this year after his mum “followed her mother’s intuition” and insisted she was taken seriously. She had raised concerns after the little boy had failed to meet developmental milestones as his sister Imogen, now five, had done previously.

Ellys said: “We had numerous visits to the doctor, a paediatrician and then hospital over several months and I felt as though I was being fobbed off as doctor after doctor told me there was nothing to worry about. Now I thank God for my mother’s intuition which told me something was seriously wrong and made me determined to continue to make a nuisance of myself. When Finlay was eventually diagnosed with a brain tumour I was relieved that, finally, we had been listened to, but horrified at what might lay ahead.”

The couple were told that as few as 20% of patients with a choroid plexus carcinoma which Finlay had, survived for more than five years. They are sharing Finlay’s story in order to help raise awareness of the disease.

His mum added: “We need to stay positive for Finlay, he is not a statistic, he is our son and, for now at least, every single day he is getting better. He has come such a long way compared to how he was before the tumour was removed and, despite everything, he always has a huge smile on his face. Finlay is the most loving little boy and a true inspiration to us and everyone who meets him. He is our little soldier and continues to amaze us every day with his bravery and strength.

“It’s easy to sit back and think something like this won’t happen to you but it does, I am living proof of that, it has happened to our little boy. For this reason we all really do need to raise more funds and awareness to help fund the fight against brain tumours for all those amazing people, like Finlay, who are fighting. Hopefully, one day we will find a cure.”

Suzanne McKenna, Head of Community Fundraising for Brain Tumour Research, said: “We are extremely grateful to Ellys and Anthony for their fundraising and also for sharing Finlay’s story. Sadly they are not alone in their experience. Brain tumours kill more children and adults under the age of 40 than any other cancer yet just 1% of the national spend on cancer research has been allocated to this devastating disease.”

To donate to Brain Tumour Research via Ellys and Anthony’s JustGiving page please go to https://www.justgiving.com/fundraising/Ellys-Niles