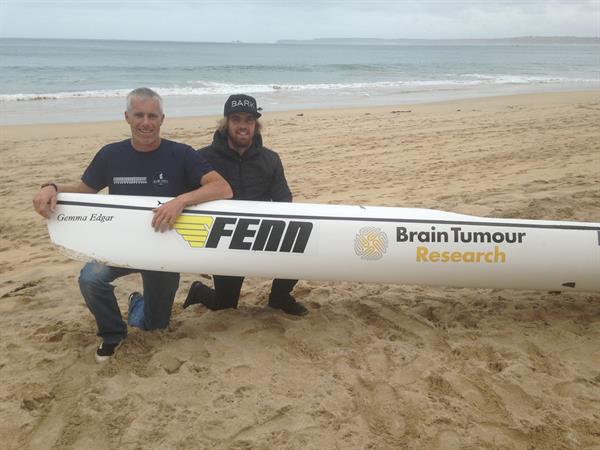 St Ives men Glenn Eldridge, 47, and Jack Coop, 30, will attempt to paddle the 48km distance across open water from St Ives, passing Godrevy Lighthouse to just past Trevose Head Lighthouse near Padstow. The fundraising challenge has been inspired by Gemma Edgar, 33, a Colchester mum of two young boys. Glenn and Jack have set themselves a target of raising £2,000 to help find a cure for brain tumours which kill more children and adults under the age of 40 than any other cancer.

Two years ago in September, Glenn, who runs the Ocean Sport Centre in Carbis Bay, coached Jack Coop and Gemma’s father and brother Andy and Lee Relf, to enable them to take part in and complete the Celtic Crossing, a race from the Scilly Isles to Sennen Cove in Cornwall – classed as the toughest open ocean kayak race in the northern hemisphere.

This year, having learnt that Gemma, whose sons Dylan and Noah are now six and four, have hatched a plan to paddle a similar distance on the very same surf ski that Andy and Lee used to also raise vital funds for the Brain Tumour Research charity.

Glenn said: “I met Andy in the summer of 2015, a year after Gemma was diagnosed aged 29 with an aggressive brain tumour for which there is no known cure. He persuaded me to help him and Lee with their training to take part in the Celtic Crossing the following year, even though it is normally only open to the world’s best surf ski paddlers.

“Since then we have met up each year with Andy and his wife Barbara when they have come down on holiday to Cornwall and kept in contact in between. When I heard Gemma wasn’t doing so well I immediately wanted to do something. Jack and I thought it would be good to take on a challenge using the very same ski that Andy and Lee used in 2016, which I had then bought from them and used to help train novice ski paddlers because it is so stable.

Andy said: “We are incredibly touched by Glenn and Jack’s gesture. Gemma’s condition deteriorated rapidly in September and it was heart-breaking to hear that the tumour had grown considerably and was deemed inoperable. She has been so strong and upbeat, but is now quite poorly.

“Brain tumours are indiscriminate and can affect anyone at any age. Research is desperately needed to bring hope to families struck by this devastating disease in the future. It is unacceptable that less than 20% of those diagnosed with a brain tumour survive beyond five years, compared with an average of 50% across all cancers. Please donate to Glenn and Jack’s fundraising page inspired by Gemma.”

Michael Thelwall, head of community fundraising at Brain Tumour Research, said: “For too long brain tumours have been a neglected cancer. Gemma and her family have helped us both to fund research into brain tumours at our dedicated centres and also to campaign for change. We wish Glenn and Jack success in their fundraising challenge inspired by Gemma and urge people to support them and donate now. Together we will find a cure.”

Money raised from the challenge is going to Brain Tumour Research which is funding dedicated UK Research Centres of Excellence where scientists are focused on improving outcomes for patients and, ultimately, finding a cure. Historically, just 1% of the national spend on cancer research has been allocated to brain tumours and the charity is lobbying the government and the larger cancer charities to increase this.

You can make a donation inspired by Gemma to Glenn and Jack’s fundraising page at https://www.justgiving.com/fundraising/glenn-eldridge4