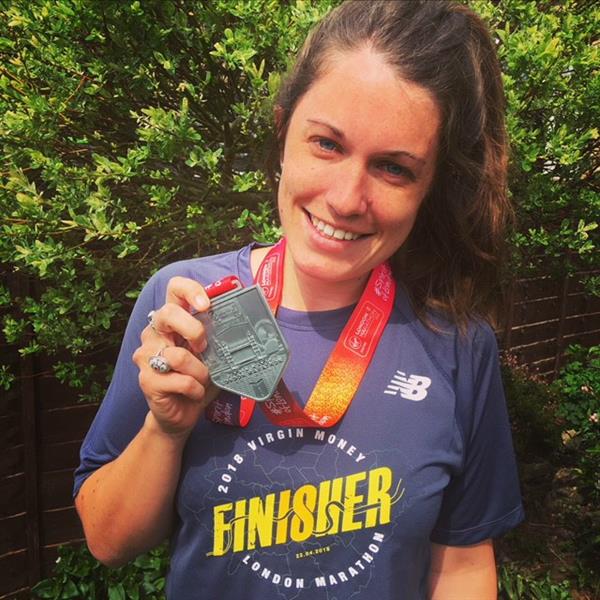 A Bristol nurse has completed the Virgin Money London Marathon for the pioneering charity Brain Tumour Research after a close friend was diagnosed with the disease.

Sophie Stirling, aged 28, was inspired to take on the running challenge after her friend, Amy Quin, aged 35 from Poole, was diagnosed with a grade three astrocytoma in May 2016. Amy, who is mum to five-year-old Hector and a part-time barber at Flash Harry’s in Dorchester, experienced severe headaches and despite several visits to her GP, the tumour went undiagnosed.

Three months on from her initial symptoms, Amy suddenly lost all feeling in the left side of her body and was rushed to A&E where an MRI scan identified an inoperable tumour, and she was given the prognosis of seven years. Since diagnosis, Amy has been given shunts and undergone chemotherapy and radiotherapy to control the tumour’s growth.

Sophie, who works as a deputy sister on the Emergency Admissions unit at Poole Hospital, said: “Running the London Marathon for Brain Tumour Research has been such an honour. Knowing that I was raising money for research into this dreadful disease spurred me on throughout training and Amy’s support helped me push through to the finish line.

“I’ve seen first-hand how devastating brain tumours are and that’s why I’m hoping to raise £1,000 towards research into the disease. I want to see improved prognoses for patients and ultimately a cure.”

Sophie was one of 40,000 runners taking part in the event which was started by The Queen from the grounds of Windsor Castle. It was the 38th London Marathon to take place since the first on 29th March 1981.

The money Sophie raises will go towards the pioneering charity Brain Tumour Research which funds a network of dedicated Centres of Excellence where scientists are focused on improving outcomes for patients and, ultimately, finding a cure.

Michael Thelwall, Head of Community Fundraising for Brain Tumour Research, said: “Sophie’s determination and commitment are fantastic and I hope her story will provide inspiration to others whose lives have been affected by a brain tumour.

“Brain tumours kill more children and adults under the age of 40 than any other cancer – and more women under 35 than breast cancer – yet just 1% of the national spend on cancer research has been allocated to this devastating disease.

“For too long, brain tumours have been a neglected cancer. Experiences like Amy’s remind us all that we cannot allow this desperate situation to continue. We are extremely grateful to Sophie and offer our congratulations to everyone who took part in this year’s event to raise money for charity.”