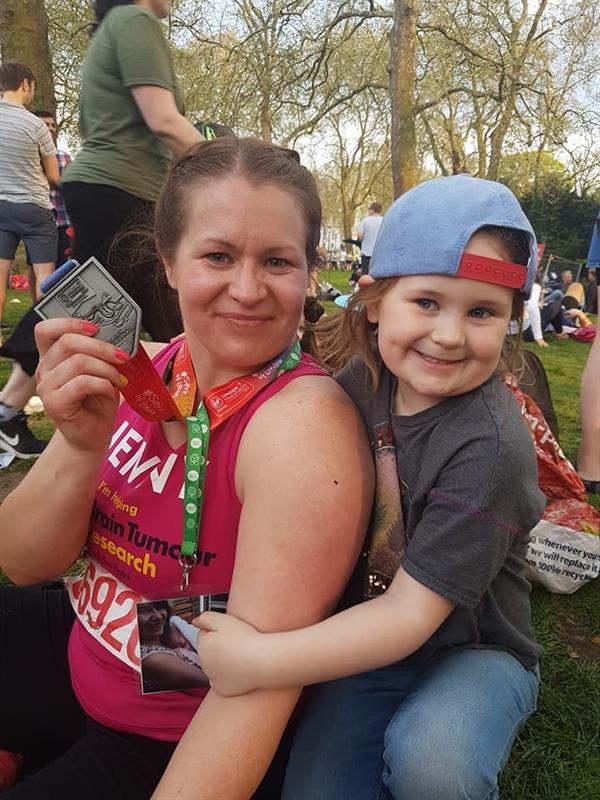 A woman from Nuneaton has completed the London Marathon with a time of 7.18 to raise funds to help scientists find a cure for the disease which took her mother, also from Nuneaton.

Jennifer White, 37, of Quantock Drive, who works for building merchants Taylor Maxwell, last year had to pull out of the London Marathon due to injury while training. She was inspired to take on the marathon challenge having lost her mother Kathy Bridge just four months after she was diagnosed, following a seizure. Kathy was 62 when she passed away and had helped many children in the town learn to read during her 16 years as a teaching assistant at St Paul’s C of E Primary School until she became ill.

Now, Jenny has raised more than £4,300 for the pioneering charity Brain Tumour Research which will help fund research within its Centres of Excellence where scientists are focused on improving outcomes for patients and, ultimately, finding a cure. She is hoping that her final total will be £5,480 – enough to fund two days of research.

Jenny said: “I have seen first-hand the devastation this disease causes to families. Mum was diagnosed with an aggressive and incurable glioblastoma multiforme brain tumour (GBM), which is sadly the most common type. It was such a shock to us to hear that there was no cure and that any treatment would just give us a bit of extra time with Mum. In the end we only had four very short months.

“For obvious reasons, raising funds for research into brain tumours is a cause very close to my heart. I am not a runner – in fact I hate it – but I have managed to get from not being able to run to the end of the road to running 26 miles. I hope that my marathon effort will also help to raise awareness of the shocking statistics around this disease.

“Yesterday was the hardest day of my life, apart from Mum’s illness and passing. Hot, hard, horrible… yet beautiful, awe-inspiring and magnificent. I feel privileged to have been part of it.”

Jenny was among 40,000 runners taking part in the event which was started by The Queen from the grounds of Windsor Castle and relayed to big screens at the start line in Blackheath. It was the 38th London Marathon to take place since the first on 29th March 1981.

Michael Thelwall, Head of Community Fundraising for Brain Tumour Research, said: “Jenny’s determination and commitment are fantastic and I hope her story will provide inspiration to others whose lives have been affected by a brain tumour.

“For too long, brain tumours have been a neglected cancer. Experiences like Kathy’s remind us all that we cannot allow this desperate situation to continue. We are extremely grateful to Jenny and offer our congratulations to everyone who took part in this year’s event to raise money for charity.”