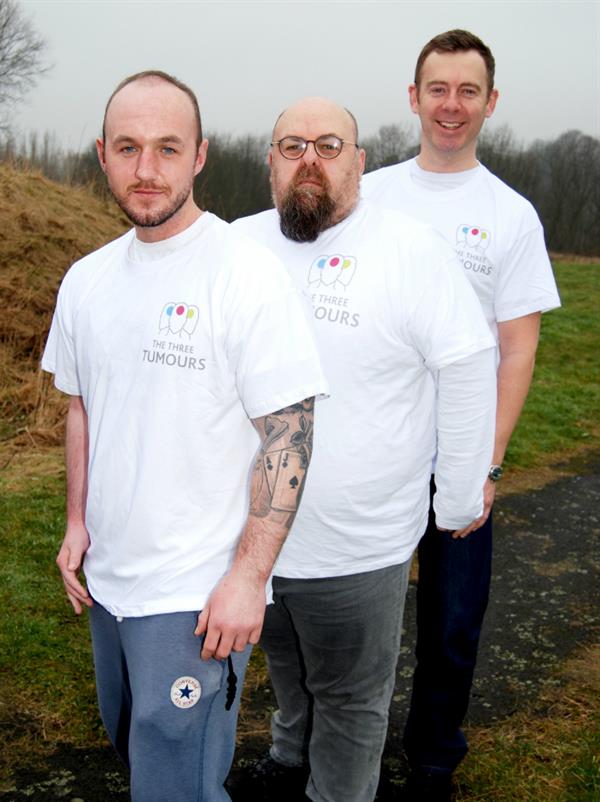 Three men from the North East, who have all been diagnosed with aggressive and incurable brain tumours, set out today (24th April) to walk Hadrian’s Wall to raise £50,000 to help fund research into the disease.

The intrepid trio started from Bowness-in-Solway to trek 84 miles along the length of Hadrian’s Wall with the aim of finishing on 2nd May at Wallsend. They hope to raise awareness of this devastating disease, including the fact that the North East has the highest rate of brain tumours diagnosed per 100,000 of the population in England, with 19.0 cases per 100,000 diagnosed in 2014 – 2.3 more cases than the national average.

The average life expectancy for this form of brain tumour is 12-18 months. Less than 20% of brain tumour patients survive beyond five years compared with an average of 50% across all cancers.

The tenacious trio, defying the odds of survival, have launched their own charity – The Three Tumours – to raise funds to help research into brain tumours.

Graydon said “Brain tumours kill more children and adults under the age of 40 than any other cancer, yet just 1% of the national spend on cancer research has been allocated to this devastating disease.

“We are delighted to be joined in our challenge by fellow survivor Richard Stewart, 63, from Seaton Sluice, near Whitley Bay, who was diagnosed with a GBM4 nearly three years ago. We have all had to learn to live with ongoing issues as a result of our brain tumours, ranging from the risk of having another seizure to balance, sight and speech problems, or in Dan’s case losing the use of his right side. So it’s not surprising that we are very grateful that Vincent McCluskey, who works for the Scottish Ambulance Service and is a qualified paramedic, has chosen to accompany us on the long trek!

“Walking 84 miles along Hadrian’s Wall over the course of a week might not sound that hard-core to serious athletes, but some days we struggle to walk 20 metres as a result of our condition!

“We want to raise as much money as possible and would love to smash the £50,000 target. Much more funding is needed for research to find more effective treatments and ultimately a cure. The cash raised will be donated to three national charities: Brain Tumour Research, The Brain Tumour Charity and brainstrust.”

Ian commented: “I have had brain cancer for the last seven years and been unable to work all that time. For the last five years, my time has been dedicated to numerous charities, including local community work and working with people affected by strokes.

“The Three Tumours gives us a chance to send a sense of hope and positivity to others who may be affected themselves or who have a loved one affected by a brain tumour/brain cancer.”

For more information or to donate, visit https://uk.virginmoneygiving.com/Team/thethreetumours

The Three Tumours was set up by Ian Hardy, Graydon Downs and Dan Howard.