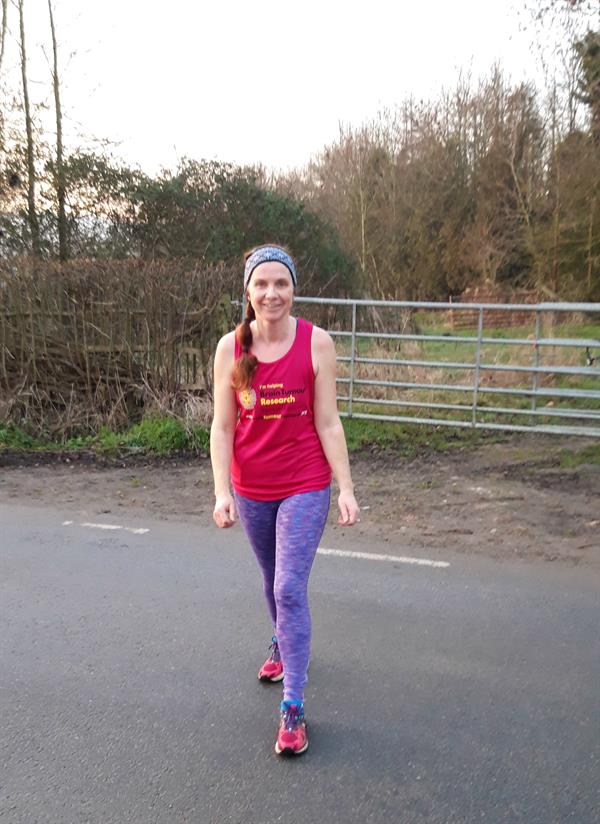 A mother-of-two with two friends diagnosed with brain tumours and a third lost to the same condition, has been inspired to tackle the London Marathon to help scientists find a cure for the disease.

Vicki Salmon, 39, from Lower Brailes near Banbury, will take part in this year’s event to help fund research into the disease that claimed the life of a father of three young children who lived in Willington.

Vicki and her husband Martin, a self-employed builder, first got to know Andy Bygate and his family when they were assistant leaders of Shipston Cub Scouts and their own son Edward was a member of the pack. She is already in training and is aiming to raise £3,000 for the Brain Tumour Research charity.

A nursery and reception teacher at Brailes Primary School, where she is also responsible for managing special educational needs, Vicki is mum to Edward, now 16, (a student at Chipping Camden School) and Faith, six, a pupil at Brailes Primary.

Ben Lindon, 39, from Malvern, a father of two young children is the friend who spurred Vicki to return to running, having first completed the London Marathon back in 2007, not long after the premature birth of Edward. Ben has been a friend of Vicki’s since the pair were both themselves teenagers at Chipping Camden School. He was diagnosed 10 years ago and underwent surgery and more than 120 cycles of chemotherapy.

Vicki said: “Since my marathon challenge in 2007, apart from running around after my children, teaching PE and launching a kids’ marathon at school I haven’t managed to keep up jogging.

“I have been so inspired by Ben’s determination and how he has coped with all the obstacles life has thrown him. Amazingly he has undertaken fundraising challenges of his own for Brain Tumour Research including the London Marathon and cycling from John O’Groats to Land’s End and raised tens of thousands.

“With two further friends affected, including a colleague in the Stour Federation who was recently diagnosed and has just started radiotherapy treatment, I decided it was high time I helped make a difference for patients diagnosed with the biggest cancer killer of the under 40s. It is shocking that research into this devastating disease is so underfunded so I am hoping to inspire people to join me in fundraising for this vital cause.”

Vicki will join tens of thousands of runners pounding the streets of the capital at Virgin Money London Marathon, the world’s most famous running event, on Sunday 28 April 2019.

Paula Rastrick, community fundraising manager at Brain Tumour Research for the Central region, said: “Vicki’s enthusiasm to fundraise and help raise awareness of brain tumours is fantastic and we are extremely grateful for her support.

“Sadly, the disease kills more children and adults under the age of 40 than any other cancer. We cannot allow this desperate situation to continue.”

To make a donation to Vicki’s fundraising go to https://uk.virginmoneygiving.com/FaithsplashlikePeppaPig

The London Marathon takes place on Sunday 28 April 2019. If you’ve been inspired by Vicki and want to run alongside her, contact Sarah@braintumourresearch.org

Liz Fussey at Brain Tumour Research on 07811 068357 or liz@braintumourresearch.org.