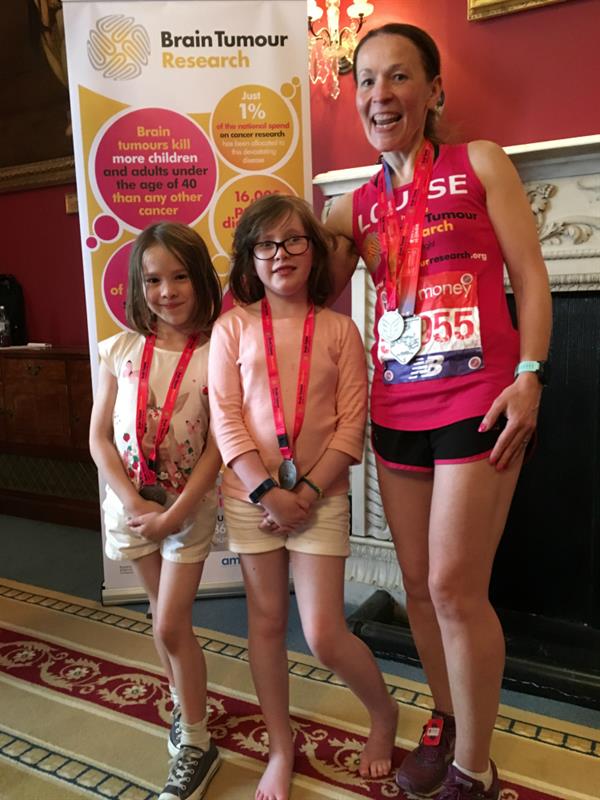 A mum has dedicated her first London Marathon to her daughter who has just completed a year of gruelling treatment for a brain tumour.

Louise Milliken’s challenge has already raised more than £15,000 for the pioneering charity Brain Tumour Research. The money will fund vital work focused on improving outcomes for patients and, ultimately, finding a cure.

Daughter Katie, aged 11, was among friends and family who cheered Louise on throughout Sunday’s event and the inspirational mum has dedicated her efforts not just to her own daughter but to all patients and families affected by the cruel disease.

The family live in Clarkston, East Renfrewshire, and mum Louise, had initially set her sights on raising £5,000 for the charity which funds a network of Centres of Excellence. Thanks to the generosity of friends and family she had smashed the target event before putting her first foot over the line to raise £15,000 and, she hopes, there will be more to come.

Louise, who works part-time as an HR Manager, was one of 40,000 runners who took pounded the streets of the capital in the world’s most famous running event. She said: “It was my first and I think almost certainly my last marathon! It was the most incredible feeling, very tough and very emotional but I have the most amazing daughter who is brave and still smiling despite everything she is going through. The thought of Katie and her battle and of all of those families who are touched by brain tumours kept me going.”

Katie’s tumour, a low-grade juvenile pilocytic astrocytoma is deep in the middle of her brain which means surgery is not an option. Since her diagnosis she has endured 18 months of chemotherapy, countless operations, hospital stays and blood and platelet transfusions. Three months of proton beam therapy in Jacksonville, Florida, proved unsuccessful and Katie, who is now part-way through another 18 months of chemo, has managed to continue attending Carolside Primary School throughout.

Louise, who works part-time as an HR Manager, completed the event in the gruelling heat in an impressive 4:18:25. She said: “Throughout it all Katie has been amazing but the tumour has caused irreversible changes. Her balance and co-ordination are poor, she can no longer run and has had to learn to write with her left hand. When she should have been enjoying the typical life of a child, she has been attending hospital for chemo, sickness, infections, blood transfusions, scans, operations and other tests. Despite this she still manages to attend school almost full-time and her positive outlook and chatty nature rubs off on all who get to know her.

“Katie is missing out on so much although she has worked so hard to rehabilitate herself and overcome her balance and co-ordination problems. One of the most heartbreaking things for me is seeing children running around and playing with their siblings and having to live with the knowledge that Katie and her little sister Charlotte, seven, have been robbed of this.”

Joe Woollcott, Community Fundraising Manager for Brain Tumour Research, said: “Brain tumours kill more children and adults under the age of 40 than any other cancer – and more children than leukaemia – yet just 1% of the national spend on cancer research has been allocated to this devastating disease.

“For too long, brain tumours have been a neglected cancer. Stories like Katie’s remind us all that we cannot allow this desperate situation to continue. We are extremely grateful to Louise for her support and congratulate her for her dedication. Together we will find a cure.”

To make a donation to Brain Tumour Research via Louise’s JustGiving page.