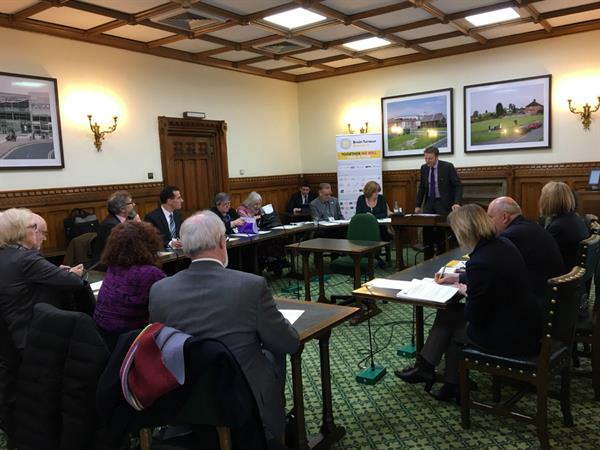 A cross-party group, set up to champion the cause of brain tumours, has announced a new Inquiry into the economic and social impacts of the disease. Brain tumours kill more children and adults under the age of 40 than any other cancer.

This first-ever Inquiry into this issue will run throughout spring and summer, reporting after the summer recess. The formal terms of reference were agreed by MPs and peers at the All-Party Parliamentary Group (APPGBT) on Brain Tumours in Westminster on 27th February 2018.

This comes just weeks after former Minister for Public Health and Culture Secretary, Tessa Jowell, shared her story with the BBC and the House of Lords about her own brain tumour diagnosis. Baroness Jowell was diagnosed with a high-grade glioblastoma multiforme after a seizure in May 2017 left her hospitalised. Less than 20% of those diagnosed with a brain tumour survive beyond five years, compared with an average of 50% across all cancers.

APPGBT chair, Derek Thomas MP, said: “A brain tumour is a devastating and costly business for the patient and everyone around them. Costly on a personal level in terms of the lives damaged and cut short, costly in terms of the diagnosis, treatments and medical support required or sought, and costly in a whole myriad of ways in which we only have the smallest glimpse. The APPG wants to shine a light on these impacts as we strive forward in finding a cure.”

Sue Farrington Smith MBE, Chief Executive of the charity Brain Tumour Research, which provide the secretariat to the APPGBT, said: “Brain tumours are indiscriminate; they can affect anyone at any age. It is vital that we understand the true impact of the disease on patients, families and the wider public, in order to effect the positive change which is so desperately needed.”

The All-Party Parliamentary Group on Brain Tumours (APPGBT) was established in 2005 to raise awareness of the issues facing the brain tumour community in order to improve research, diagnosis, information, support, treatment and care outcomes.

Since 2005, MPs and Peers from across the political spectrum have worked together in supporting the brain tumour community, researchers, clinicians and most importantly, patients and their families. Led by the Chair of the APPGBT, Derek Thomas MP, Officers oversee the Group’s activities and promote the issues of the brain tumour community across Parliament and beyond. Brain Tumour Research provides the secretariat for the group.

APPG on Brain Tumours Inquiry Panel will consist of parliamentarians joined by representatives of patients and carers who work to raise awareness of brain tumours, support patients and their families and invest in brain tumour research. Brain Tumour Research will provide the Secretariat for the Inquiry and produce the report, expected to be published in the autumn.