Mother whose son set up brain tumour charity urges local community to get their Hats on for Brain Tumour Research! 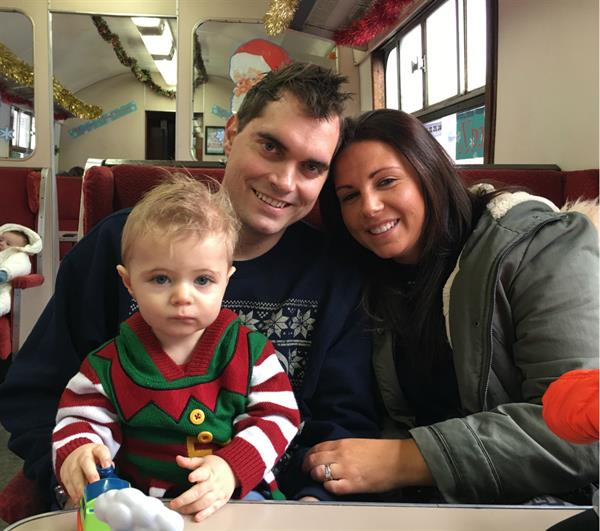 A Blackburn woman, whose son was diagnosed aged 25 with a grade 4 glioblastoma multiforme brain tumour, is inviting local people to help raise funds for scientists working to find a cure for brain tumours.

Mum Sharon Hacking, 54, who lives in Great Harwood, recalled how Jay, now 31 and living in Clitheroe, began to struggle with reading numbers or words and then started having little epileptic fits, but when he went to the GP he was told that he was depressed and recommended to have counselling. It wasn’t until Jay collapsed with what his sister, Jo, a coronary care nurse, believed to be a mini-stroke and was rushed to hospital that his family first knew anything was seriously wrong.

Sharon explained: “The scan revealed a small mass on the brain. It was the last thing I expected – maybe I was being very naïve. We were given the devastating news that Jay would need an operation and that they would keep him in hospital and transfer him to the neurological unit at the Royal Preston Hospital. He had an MRI scan, followed the very next day by brain surgery. A registrar told us to prepare for the worst – Jay had a serious brain tumour.”

Following surgery, and chemotherapy and radiotherapy treatment, which made Jay extremely fatigued, Jay looked around for support groups. Apart from groups for children and old people, there seemed to be nothing appropriate for people like him, so Jay was inspired to set up a charity to support adults between the ages of 18 and 40, leading to the birth of Inbetweenears.

Sharon continues: “Jay is married to a lovely lady called Becky and they have a gorgeous 14-month-old son, who they have named Teddy. The Royal Preston call Jay their little miracle because he was given six months to live yet he is still very much alive more than six years on.”

Sharon explained: ““Every year more than 16,000 people are diagnosed with a brain tumour in the UK, and it is so distressing for the families involved. More research is vital if we are to understand what causes different types of brain tumour, and importantly find a cure for this devastating disease.

“It would be fantastic if as many people as possible could hold Wear A Hat Day events of their own or make a donation to support research – Inbetweenears is funding a researcher at UCLAN within Preston University.

Among celebrity supporters of this year’s campaign is the businesswoman, model, actress and mum Caprice Bourret who underwent surgery to remove a low-grade brain tumour which was diagnosed nearly a year ago. She continues to be monitored by her medical team.

Caprice said: “I have been so touched by Jay’s story. It’s incredible to hear about the work Inbetweenears is doing. It’s terrible that brain tumours affect so many people. This devastating disease is indiscriminate and can affect anyone at any age.

“I’m proud to be working with this lovely family and so many others to support Wear A Hat Day. I want everyone to get involved! It’s such a fun event and anyone can take part. Let’s all put our hats on and do something positive for Jay and support the fantastic research going on right now. I’m determined to try to make a difference for the 16,000 people diagnosed with a brain tumour each year.”

For more information or to support Inbetweenears, go to www.inbetweenears.co.uk  or follow us at www.facebook.com/inbetweenears