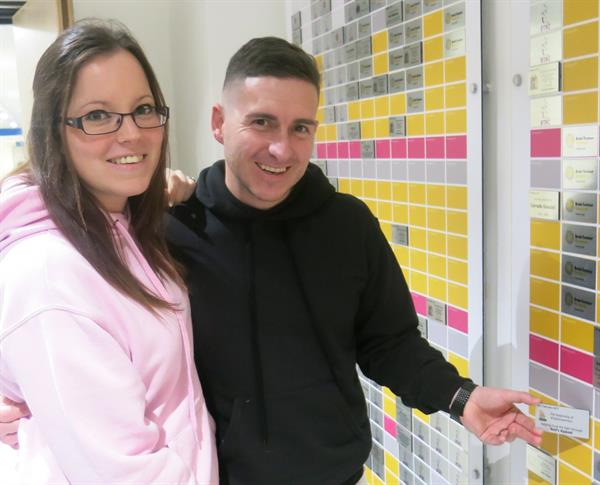 A young Middleton couple who are on a mission to fund the fight against brain tumours have met with scientists researching a cure for the disease.

Neil Taylor, a 33-year-old brain tumour patient, and his wife Alex, met scientists at the Brain Tumour Research charity’s Research Centre of Excellence at Imperial College London. Their visit comes following the launch of Neil’s Appeal, their Fundraising Group under the umbrella of Brain Tumour Research.

Neil, who works as a franchise supervisor at McDonalds was first taken ill in late December 2016. Recently married and looking forward to the birth of their first child, Neil and Alex were told the devastating news that Neil had a grade 3 astrocytoma. He underwent surgery and treatment and the couple soon after set out to fundraise towards research into the disease.

On Thursday 6 December, Neil and Alex were given a tour of the research facility at Hammersmith Hospital and heard from lead scientist Dr Nelofer Syed about the work taking place there. They met Kevin O’Neill, a leading neuro-surgeon at Charing Cross Hospital who told them about how the research work was being translated into new surgical tools, such as the iKnife, which can differentiate between tumour and normal brain cells during surgery.

Neil said: “It was an honour to meet scientists who are working so hard to improve outcomes for patients like myself. Research is our only hope but historically, just 1% of the national spend on cancer research has been allocated to this devastating disease. We can’t allow this situation to continue.”

In recognition of the £12,085 they have raised to date, Neil and Alex placed tiles on the Wall of Hope at Imperial College where each tile represents the £2,740 it costs to fund a day of research. With the help of their supporters – known as #TaylorsWarriors – Neil and Alex have raised the money through various events including a charity head shave, a Manchester to Blackpool cycle challenge and, most recently, a launch event at Lock 91 in Manchester.

Alex added: “We’re so touched by how much everyone is supporting Neil’s Appeal. To have raised the profile of Neil’s Appeal on our launch night and be joined by many more #TaylorsWarriors was fantastic and I hope we continue this way as we plan more and more events. We want these warriors to organise events of their own, to help us create a strong community and raise awareness of brain tumours. Touring the lab at Imperial College reminded us why we need to keep going.”

Andrea Pankiw, community fundraising manager at Brain Tumour Research, said: “We’re delighted to welcome Neil’s Appeal as a Fundraising Group and we’re extremely grateful for the support of Neil, Alex and #TaylorsWarriors. It’s incredible that Neil is so determined to fundraise, despite everything he has been through. I hope his story will inspire others to raise money towards improved treatments and, ultimately, a cure.”

To donate to Neil’s Appeal, go to: https://www.justgiving.com/fundraising/Neil-Taylor27