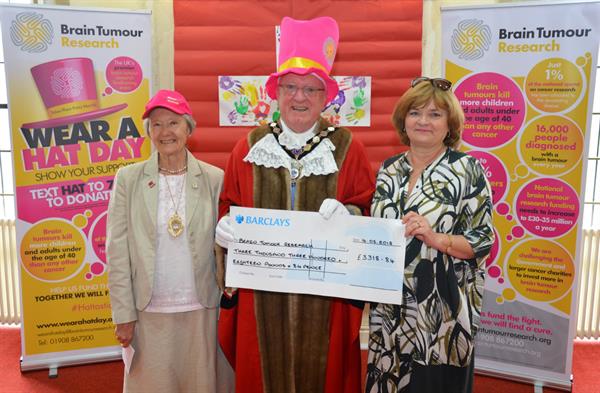 The Mayor of Exmouth has celebrated the extraordinary fundraising efforts of residents, schools and businesses across the town with a cheque presentation to pioneering charity Brain Tumour Research.

Councillor Brian Cole named Brain Tumour Research as his mayoral charity of the year and since then the town has collectively raised over £3,000 for research into the devastating disease.

On Wednesday 16th May at Holy Trinity Church Hall, Cllr Cole presented the cheque to Sue Farrington Smith, Chief Executive of Brain Tumour Research. In attendance were members of Exmouth Town Council and representatives of the various organisations and individuals who helped to fundraise.

A large portion of the funds came from a variety of events on Wear a Hat Day – the charity’s annual fundraising event which took place on Thursday 29th March. Individuals and organisations across Exmouth, including Specsavers, Santander and Barclays, came together to host bake sales, take collections and much more.

Cllr Cole said: “I’m so pleased that Exmouth has raised vital funds for research into brain tumours. The money raised so far will fund research for one day and I hope we can continue to keep supporting the charity. Every year more than 16,000 people are diagnosed with a brain tumour in the UK, and this cause is very close to my heart as brain tumours can attack anyone at any age.”

Sue Farrington Smith said: “It’s such an honour to have the support of residents here in Exmouth and also to be chosen as mayoral charity of the year. Wear A Hat Day has raised over a million pounds since it was launched nine years ago, and we are extremely grateful to the contributions that fundraisers have made.”

Brain Tumour Research funds a network of dedicated Centres of Excellence, one of which is based at the University of Plymouth, where scientists are focused on improving outcomes for the many thousands of families affected by a brain tumour diagnosis every year, and, ultimately finding a cure.

We are campaigning to see the national spend on research into brain tumours increased to £30 - £35 million a year, in line with breast cancer and leukaemia. The unprecedented success of our 2015 petition led to the 2016 Westminster Hall debate and Brain Tumour Research taking a leading role in the Government’s Task and Finish Working Group convened to tackle the historic underfunding for research with the report being published in 2018