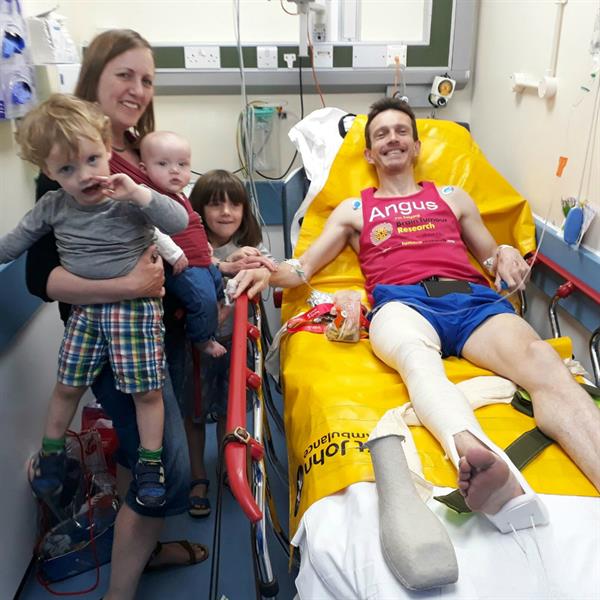 A runner who missed out on his target of under three hours, when he broke his leg just yards from the finish line of the London Marathon, is vowing to run again in 2019.

Angus Cameron, aged 45, from Hackney, was running the marathon for the pioneering charity Brain Tumour Research, following the death of his childhood friend and the diagnosis of a university friend. In previous years, Angus has run dressed as a knight in armour and a cyberman, but 2018 was his first attempt at finishing the 26.2-mile course under the amateur runner landmark of three hours.

On course to finish the race in two hours and 59 minutes, Angus’s leg gave way. He said: “As I was rounding the bend before The Mall, I felt an almighty pop. At that moment, I assumed I’d pulled something and I could no longer run at full pace to hit my target. I decided just to get across the finish line so I carried on hobbling but then my leg completely gave way and I fell to the floor. Looking down at my obviously broken leg it was clear I was not going to be able to crawl to the line. Luckily, I was helped by the amazing paramedics who were quickly at the scene. The pain was fairly extreme and I was just desperate to speak to my wife to make sure she knew I was in good hands.

“I’m disappointed that my sub-three-hour goal was shattered just metres from the finish line, but a broken leg is nothing compared with what my friends have been through. And it doesn’t stop my fundraising for Brain Tumour Research. My target is £5,000 and I hope I can still beat that.”

Angus’ wife Amy and their three children, Lola, Fraser, and Edith, were at the 24-mile cheer point tracking his progress. Amy said: “When Angus ran past at 24 miles we knew he was on track to achieve his time. When his finish time didn’t update, it never occurred to me that he hadn’t crossed the line.”

Medics were immediately at the scene to assist Angus and he was wheeled over the finish line where he was given a consolation medal. Official marathon rules state that runners are not permitted to use any wheeled device in the race – except for wheelchair entrants.

Angus said: “I don’t think anyone will begrudge me getting a medal but of course I’m disappointed that, ‘officially’ I didn’t finish, especially when I was so close.

“I’m determined to run again in 2019 – who knows what time I will be able to achieve after this but I’ll certainly be training again when I’ve recovered!”

Angus, who is a cancer researcher at Barts Cancer Institute, Queen Mary University of London, was running the marathon for his lifelong friend, Edward Andrew Morrison from Norfolk and University friend Nick Greenfield, who both developed brain tumours recently.

Edward died in January at the age of 41. Edward – also known as Andrew or Geordie – developed a highly aggressive glioblastoma multiforme (GBM) and, underwent multiple surgeries, chemotherapy and radiotherapy in the process.

Nick Greenfield, a university friend, also developed a brain tumour, which was treated by the expert team at Charing Cross Hospital. Nick, aged 45, who is Head of Tour Operator Relations at the European Tourism Association, was diagnosed in May 2017 with a secondary brain tumour following a serious prolonged headache. He was supporting Angus’ Marathon run in London.

Angus said: “In my career as a cancer researcher, I’ve always been aware of how devastating brain tumours are and also how thinly spread funding into research is. Since Geordie’s and Nick’s diagnosis however it’s shocked me how prevalent the disease is in young people. Geordie was only 41 when he died and Nick is the same age as me. Through the challenges they have faced their positive attitude has been a deep inspiration.”

Since the event, Angus has been at St. Mary’s Hospital in London where an x-ray revealed a complete fracture of his femur bone. He has since had surgery to support the fracture and is walking with crutches. The expected recovery time for Angus is three to six months.

Michael Thelwall, Head of Community Fundraising for Brain Tumour Research, said: “We are extremely grateful to Angus for his efforts in the London Marathon. His commitment to raising funds for research into brain tumours and his determination to run again in 2019 is incredible. We offer Angus our commiserations for how the marathon ended and wish him a speedy recovery.

“Brain tumours kill more children and adults under the age of 40 than any other cancer – and more men under 45 than prostate cancer -  yet just 1% of the national spend on cancer research has been allocated to this devastating disease.

“For too long, brain tumours have been a neglected cancer. Experiences like Geordie’s and Nick’s remind us all that we cannot allow this desperate situation to continue.”